Spun off from Daihatsu Motor in 1966, Daihatsu Diesel manufactures internal combustion engines, primarily for marine-use (85% of engine segment revenues) and secondarily for land-use (15% of segment revenues). Seeing that this segment accounts for 95.8% of FY 2015 sales, this blog post will largely revolve around the internal combustion engine and directly related businesses. Some of the other business segments include: Industrial machinery (Aluminum wheels), real estate leasing, and electricity sales.

Between increased competitive pressures from South Korean/Chinese companies and the slowdown in developing economies/oil industry, marine engine sales revenue have been a little sluggish, combined with declining margins:

At first glance, number of units sold does not look so bad for Daihatsu Diesel: 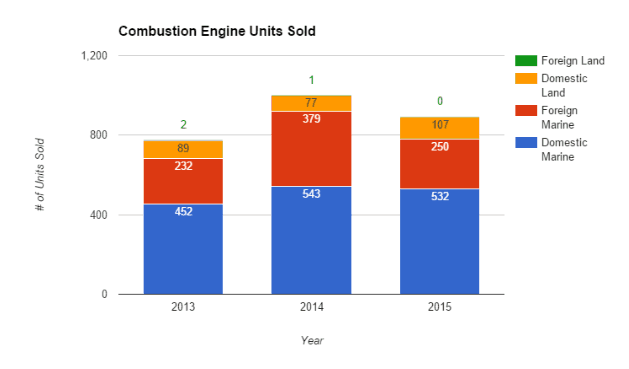 As far as global shipbuilding goes, there is China, Korea, Japan, and the rest of the world. Here is how the 3 countries have been battling against one another over the past 5 years:

Last year’s shift of shipbuilding to Japan is at least in part due to the strengthening Korean Won. The 3 major Korean shipbuilders (Samsung, Daewoo, Hyundai) all posted record losses in 2015. More recently, the shipbuilding industry as a whole has taken a nose-dive, and it has downstream effects. Daihatsu Diesel reported a sharp 61% decline in quarterly operating income (4/1/2016 – 6/30/2016) compared to the same period in 2015. The declines were largely from parts and service, while engine sales remained relatively stable. The strengthening yen had a negative impact as well. Overall, it looks like the whole industry is tightening up their wallets and bracing for impact.

Global shipbuilding tonnage has softened in the past couple of years: 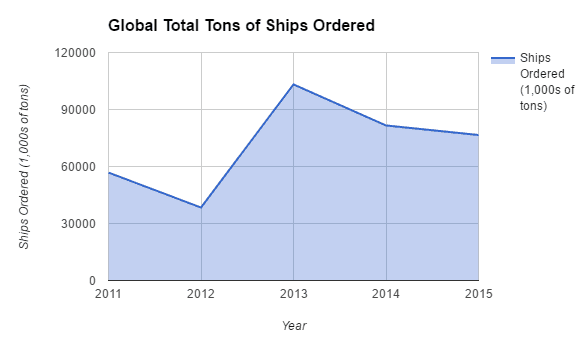 A relatively flat engine unit sales is good news for Daihatsu Diesel, even though margins have been declining. This is largely because Daihatsu Diesel has an untapped parts and service market (OEM service parts usage is roughly 50%) that started driving high margin revenue in recent years. Considering they hold a 44% market share for the domestic large vessel engine market compared to 23% of the global large vessel engine market, any shift of orders to Japan is good news. Even the low margin unit sales is important for future high margin revenues generated through parts and service.

Competitors within Japan include: Yanmar (Private) and Hanshin Diesel (TYO: 6018). Competitors outside of Japan are MAN Diesel, Himsen (Part of Hyundai), and Wartsila.

Revenue and gross profit has not really gone anywhere in the past 10 years:

This is a good thing, considering the rising competitive pressures from Korean and Chinese companies. In fact, Daihatsu Diesel has been strengthening its balance sheet over the same period: 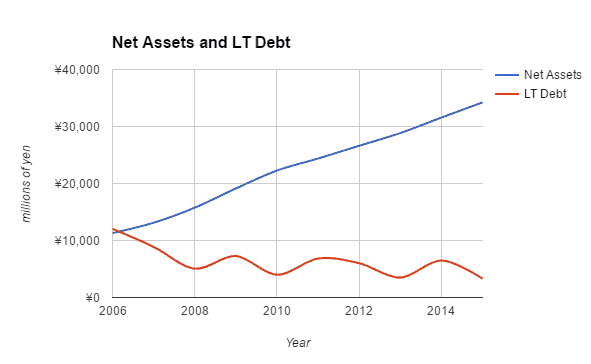 ROA has consistently remained around 3-6%: 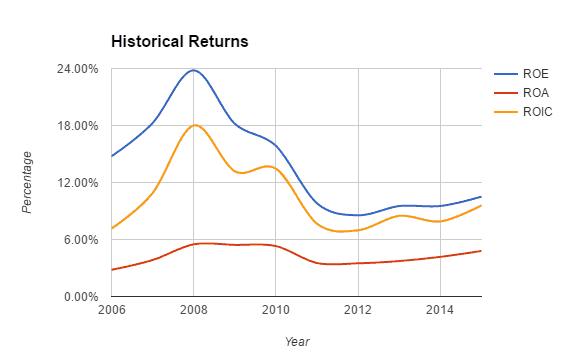 The 2008 spike in ROE and ROIC seems to be more a function of leverage than any sort of fundamental improvement.

There have been two main company initiatives over the past couple of years:

The land for the Himeji Facility was purchased in November 2015 (2018 production target). It is a 60,000 square meter property that sits by the water. This is good news because Daihatsu’s two Moriyama facilities (combined 150,000 square meters) are inland, which means there are added costs for disassembly, transport, and reassembly for larger vessel engines. The Himeji Facility will be focused on building the engines for larger vessels and it won’t need the additional steps to disassemble, transport, and reassemble engines. The Moriyama Facility will remain focused on critical parts, engines for mid and small size vessels, and service parts. It is probably worth noting that the management team mentions that they will be working on leadtime and manufacturing process improvements with the support of the Toyota Group.

Whether it is cars, trucks, industrial machinery, or ships, all engineering-heavy high value products seem to drive a high margin parts and service business. Daihatsu Diesel is the manufacturer of mission critical components for ships: 80% of their engines are for power generation and 20% are propulsion engines. More importantly, OEM parts usage is at 50%. They have the global service facility network ready as well:

Daihatsu Diesel does not disclose what their gross margin is for parts and service – they are all lumped into the combustion engine segment. However, their 2016 management guidance presentation provides a workable substitute: 2015 Sales mix vs. gross profit mix for Daihatsu Diesel, ex-subsidiaries: Although percentages are not listed, we can guestimate that the distribution translates to roughly something like this:

Without extrapolating much further, we can conclude that most of Daihatsu Diesel’s gross margin comes from parts and service. The real good news is that there is still some margin left in Engines. After digesting data from multiple IR documents, we get a sales mix that looks like this: 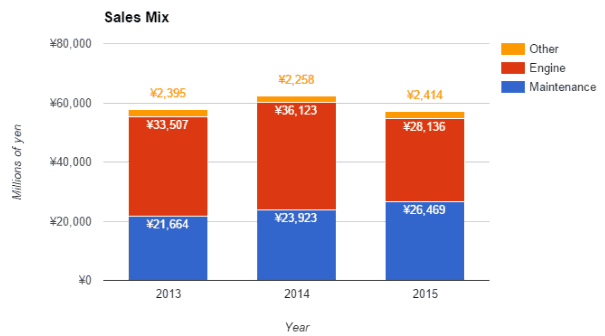 Although there is downward pressure on engine unit profitability, the units are still profitable and the number of units sold are relatively stable. Without trying to guess where margins will trend for maintenance, one thing is clear: there will be a market for maintenance work on the units sold.

At this point, I think it is safe to say that Daihatsu Diesel is not a dying company. This is important because at current valuations, Daihatsu Diesel does not need to have any growth prospects to be a good investment. While earnings figures have been beat down in the immediate past, I would not place too much emphasis on this as Daihatsu Diesel has a healthy balance sheet and the beat down is an industry wide, international issue at the moment.

Here are a few standard market data points on Daihatsu Diesel as of 10/24/2016 (from Financial Times):

To put this into historical context, here are some data points I compiled from Daihatsu Diesel’s past 10 years of filings: 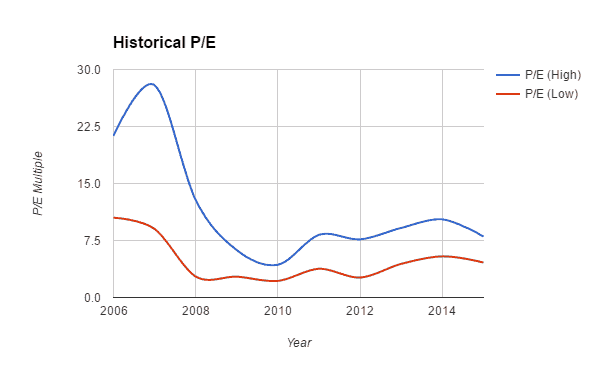 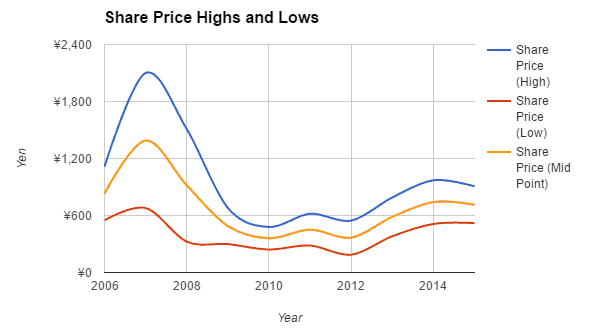 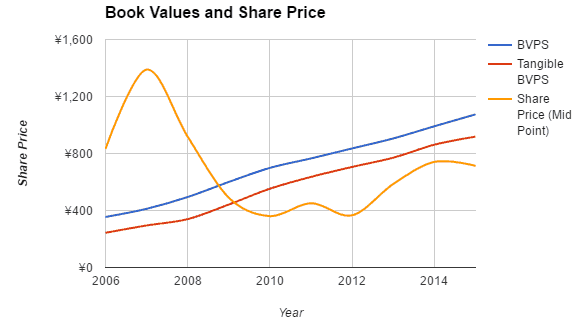 Here we go with a few takeaways. Daihatsu Diesel is no stranger to low P/E and P/B ratios, especially since 2009. The sentiment is understandable since competitive pressures from China and Korea have only increased and more recently, the global shipping industry has taken a nose-dive. However, I see opportunity for bottom-line growth (or at least stability) despite top-line stagnation, as evidenced by the shift in sales mix (in a relatively normal market). The key long-term factors that support this are: stable engine unit sales, global network of service facilities, and the current 50% OEM part usage. In the near-term, the global turmoil in shipping will probably kill earnings. However, more importantly, the stable engine unit sales can translate into a healthy stream of high margin service revenue for the useful life of engines (management plans for 30 years of useful life). Daihatsu Diesel has strong staying power, which is not only backed by their balance sheet (23,518M yen of cash vs 26,652M yen of current liabilities as of 6/30/2016), but also by their involvement with the Toyota Group.

It is worth noting that the management team intends to payout 20% of net income in dividends by 2018. This would translate into an 18 yen per year dividend if we go by 10 year average net income (2,884M yen), or roughly a 3% yield at today’s 590 yen per share price. Current dividend yield is at 1.3%. The short story here is that Daihatsu Diesel is focused on expanding its maintenance-related business, improving operating efficiency with the help of Toyota, and plans to expand into other related businesses.

Finally, we face the investor’s dilemma: Investor sentiment is negative, but that does not mean the stock price cannot go lower. However, if we try to “time the market”, we might miss the train (or ship, in this case). Amidst this global weakness in shipping, how do we think about Daihatsu Diesel? The first thing I want to note is that they are still profitable. Secondly, they are well positioned to ride through whatever downturn there is to come, even if they are not profitable in the near term. Now, they are currently trading at a 0.55 P/B multiple and their book value per share is at about 1,075 yen. Even if we assume they lose a quarter of that and eventually get valued at 1 P/B in the next optimistic market (whenever shipping gets back on its feet), we are still looking at 800 yen in book value per share. This translates into a 10.5% CAGR on a 3 year time frame for what I consider to be a moderately negative outlook. It is probably important to note that you can delay your 3,000 mile oil change until you hit 5,000 miles, but you can’t delay it forever – and the same goes with ships.

Footnote: I compiled a simplified version of 10 year financials for Daihatsu Diesel, which can be found here. I do not guarantee the accuracy of the figures in this file.