The intrinsic value is often discussed in the context of terms such as: Moat, margin of safety, earning quality, asset quality, management competence, etc.

Reading these books always lead me to the three questions that every 5 year old asks:

For my own benefit, I decided to explore into the value concept. Except this time, I wanted to start from the roots of value and work my way up.

Maslow’s Hierarchy of Needs is a good starting point for this discussion: 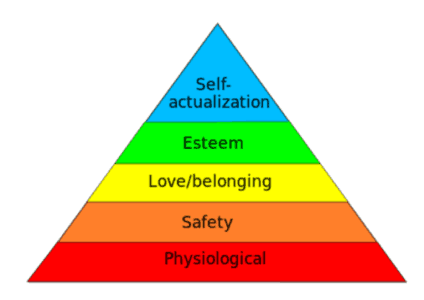 Maslow’s theory, like every other theory in existence, has its criticisms. Some criticisms are: the categorization (or miscategorization) of needs, the correct/incorrect hierarchical order of said categories, and the inter-relatedness of said categories. With that in mind, I would like to use Mr. Maslow’s theory as a general platform for discussion.

Here’s a brief overview of each category: Let’s say that once upon a time, we all lived in caves. We chased animals and picked wild berries for food. Two months ago, our cousin Jimbo had a breakthrough invention: The rock. Jimbo was lazy and did not like chasing after animals. One day, he decided to pick up a rock and throw it at the animals… and it worked! He brought food for the family in minutes and was ready to go out to get some more. This proved “valuable” in two ways: reduction of time and energy consumed. This lead to increased productive capacity. In other words, since Jimbo can bring more food back post-rock than he could have brought pre-rock, you and I can spend our time working on something else (maybe we can invent fire?). Thus far, I can identify 3 variables that we can associate with value: Time, energy, and knowledge.

All value relates to humans. When we discuss building knowledge, we do not mean building a squirrel’s knowledge. We mean human knowledge. The same goes for time and energy. This makes value both subjective and relative.

I’ve been fortunate to have lived in Japan for 16 years, the US for 11, and the Philippines for almost 1 year (and counting). It wasn’t until I moved to the Philippines that I developed an appreciation for things that are generally taken for granted in the developed world. These are things like (a relatively functional): Property rights, law enforcement, justice system, government, developed roads, currency, etc.

To make my case, business contracts in the Philippines don’t exactly carry the same weight as they do in the US or Japan. While disputes in the US and Japan tend to revolve around what is in or out of contract scope, the contract terms itself are free-floating in the Philippines. Why? Probably because taking the other party to court over a contract violation is a 30-year ordeal. In the realest sense, there is no immediate consequence for violating a contract. This has ripple effects, too. For example, “net 30 payment terms” is basically a foreign language. Credit lines between customers and vendors are almost unheard of, which means deals are done in cash. This stifles small businesses, where positive near-term cashflow means volumes more than it does to mid to large companies. When you operate in an environment where the lack of accountability does not come with serious and immediate consequences, showing good faith can mean risky business.

As I mentioned in the first section of this post, intrinsic value is often discussed in the context of terms such as: Moat, margin of safety, earning quality, asset quality, management competence, etc.

Each of the above terms describes some form of value advantage. Let’s take a look at the moat as an example:

We have two parties:

Jack owns a bow and arrow set, which he uses for 8 hours a day to bring home a day’s worth of food for his family of 5.

Let’s use the same two parties to discuss the other terms often associated with intrinsic value.

Asset quality is an interesting one. Both parties have two assets in use: Tools (bow and arrow) and people. Asset quality has several determining factors, which are:

This one is pretty simple. Assets need to be able to produce stuff. Otherwise, they wouldn’t be assets. For the two parties, this would mean the hunters’ health and maintenance of tools. If the hunters are tired or sick, they wouldn’t be able to produce as much value in comparison to when they are in prime condition. Similarly, if the bow wasn’t well-maintained, it may not be able to project the arrow as far as it is supposed to, which would limit the value that the bow and arrow is able to extract.

Price of Utility in comparison to other similar assets

An alternative view to this would be if Grower Cooperative came into business by growing livestock, which can eliminate the utility of the bow and arrow as well as the hunting gun, if food can be produced quicker or cheaper.

Value proposition of the end product that the asset produces

When both parties hunt for meat and all of humanity decides to pick up vegetarianism, both the bow and arrow and hunting gun don’t have any value to provide, as far as the meat hunting business goes. In this case, asset quality may be defined in terms of other end products that an asset can produce – typically referred to as resource conversion. For example, we might start using the arrow to till the garden for our vegetarian friends or use the hunting gun for personal protection. In contrast, if killer monkeys advanced into our community, the value the a bow and arrow and hunting gun produces may skyrocket.

“Time is the friend of the wonderful company, the enemy of the mediocre.” – Warren Buffett

Getting stuck in a habit is easy. It’s no surprise that many businesses find themselves continuously doing what they have always been doing, because that’s what was highly valued yesterday. Not that businesses need to react to every piece of news, but it helps to stay current and continuously ask how new developments affect a business’ value proposition. At the end of the day, intrinsic value is the combination of a company’s price of utility today and its ability to maintain or improve price of utility over time. After all, you don’t want to be the guy that’s still buying bows and arrows while the other guy is buying hunting guns and literally taking your lunch.