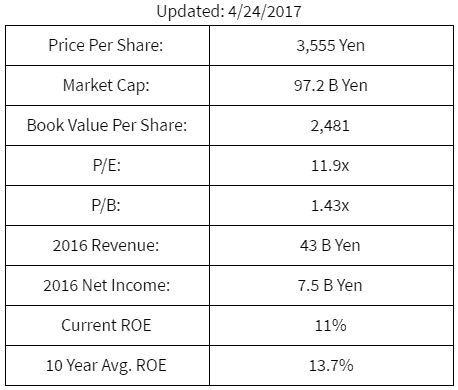 My previous report was on San A (TYO: 2659), an exclusively Okinawan company. For readers who have read that report, this section will seem redundant.

As the name suggests, Okinawa Cellular operates in Okinawa, the southernmost prefecture in Japan (full disclosure: I spent my childhood in Okinawa). Approximately 1.4 million people call Okinawa home. Major industries include: Tourism, Agriculture, Fishery, and Retail. Known for its beaches and subtropical climate, Okinawa is often called the Hawaii of Japan. In 2015, 7.9 million tourists visited Okinawa. Source: Google Maps (illustration by me)

While Okinawa is technically a part of Japan, it has its own culture for several reasons. Here is a brief timeline of Okinawa’s historical possession:

Somewhere between being annexed by Japan, experiencing the bloodiest battle in the Pacific during World War II, being secluded from mainland Japan, and hosting 60+% of US military forces in Japan, there is some disconnect between Okinawans and the mainland Japanese.

Okinawans tend to stick to Okinawan things. For example, Orion Breweries (headquartered in Okinawa) has a 1% market share in the Japanese beer market, but maintains a 50+% strong market share in Okinawa. Similarly, San A  (TYO: 2659) exerts regional dominance, operating 60+% of Okinawa’s malls/shopping centers.

Another fun fact about Okinawa is that Okinawa is the only prefecture in Japan that is expected to have a population increase going into 2020, according to the National Institute of Population and Social Security Research (Japanese source).

Here is a brief history of the mobile carrier market in Japan: 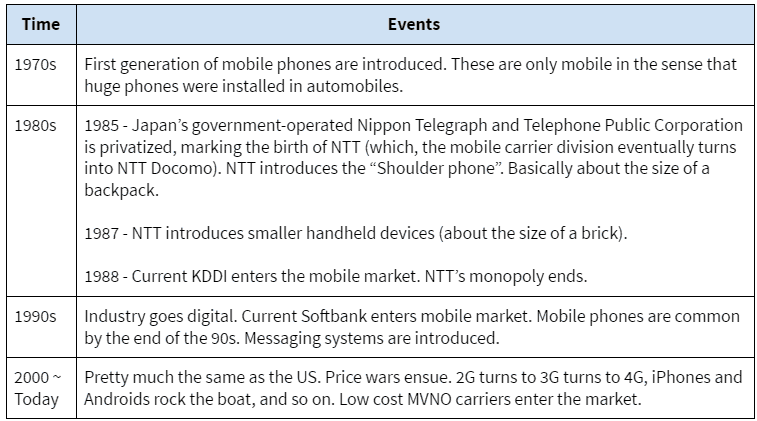 Broadly speaking, the competitive environment in the Japanese mobile carrier market can be categorized into: NTT Docomo, KDDI (Au), Softbank, and MVNO (collection of about 200 low cost carriers).

** MVNO – Mobile Virtual Network Operators: These guys basically rent rights to use cell towers from the 3 major carriers and offer low-cost mobile plans to consumers. Similar to Cricket Wireless or Virgin Mobile in the US.

To paint a general image, NTT Docomo and KDDI are the big and established carriers (not all that dissimilar to AT&T and Verizon in the US) and Softbank is the wild one that jumped in and took the industry by storm with lower priced contracts.

According to the Japanese Ministry of Internal Affairs and Communications, MVNOs account for 11.5 million contracts as of 2015, up from 6.7 million contracts in 2013. Here is a chart that shows market share movement for the top 3 carriers (excluding MVNO contracts): 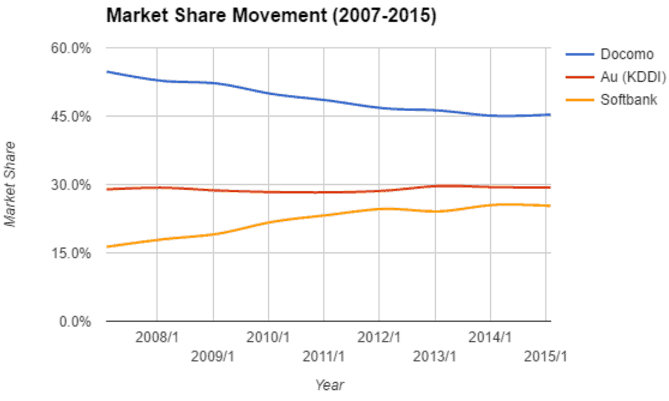 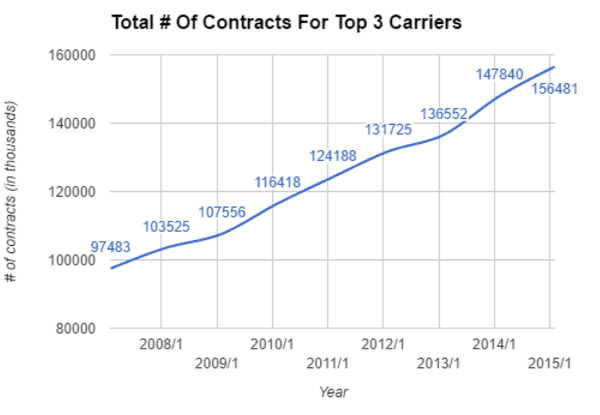 One thing to keep in mind is that the chart above shows 156M contracts, which is more than Japan’s population of 127M. While it’s somewhat common in the business world to keep company phone numbers and personal phone numbers separate, it’s safe to say that the mobile carrier market in Japan is mature.

Now, the focal point here is the Okinawan mobile carrier market. Admittedly, it’s difficult to find data on a specific market that accounts for less than 1% of the Japanese mobile carrier market. While I was unable to find data on NTT Docomo or Softbank’s number of contracts in Okinawa, I was able to find the total number of contracts in Okinawa and compare it against Okinawa Cellular’s contract number data: 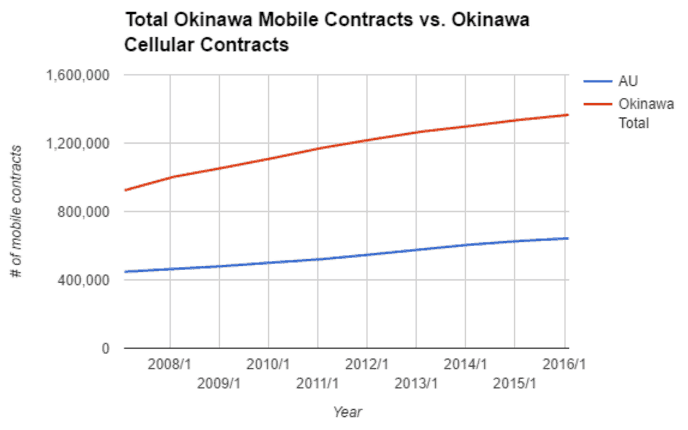 Over the past 10 years, Okinawa Cellular has maintained a 44~48% mobile carrier market share in Okinawa.

While Okinawa Cellular has been able to maintain strong  mobile carrier market share in Okinawa, revenue per contract has been declining for years: 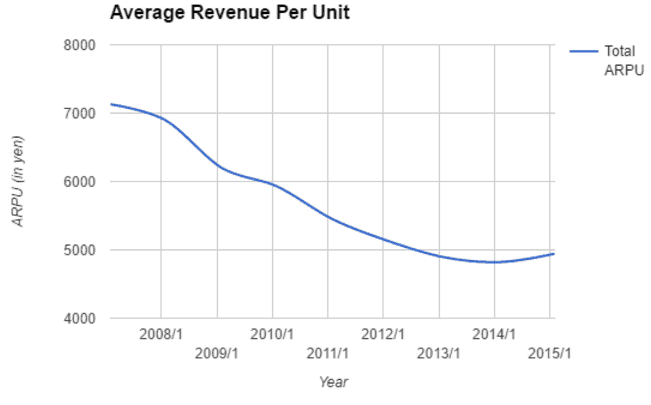 Okinawa Cellular’s ARPU trends appear to follow the overall Japanese trend with a 2 year delay or so. This isn’t particularly surprising, given the distance between major Japanese cities and Okinawa.

Of the 3 major carriers, 2 of them have an Okinawa-specific subsidiary. KDDI’s Okinawa Cellular is one and Softbank’s Willcom Okinawa (selling under the Y! Mobile brand) is another.  NTT Docomo’s Okinawa operations are managed as a part of NTT Docomo Kyushu (NTT Docomo regional subsidiary). 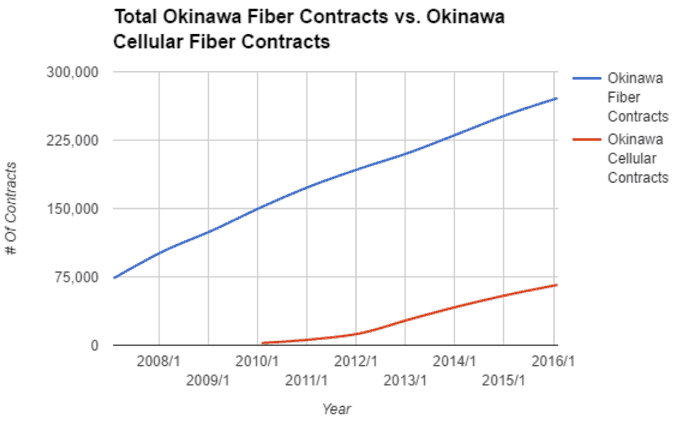 Since its fiber market entry in 2010, Okinawa Cellular has rapidly gained share. Currently, they hold a 24% share of all fiber internet contracts in Okinawa. While hardly a dominant figure, this is impressive considering KDDI’s national share of 13% (NTT Group has about 70% share nationally).

Today, approximately 44% of Okinawan households and 51% of Japanese households have a fiber contract: 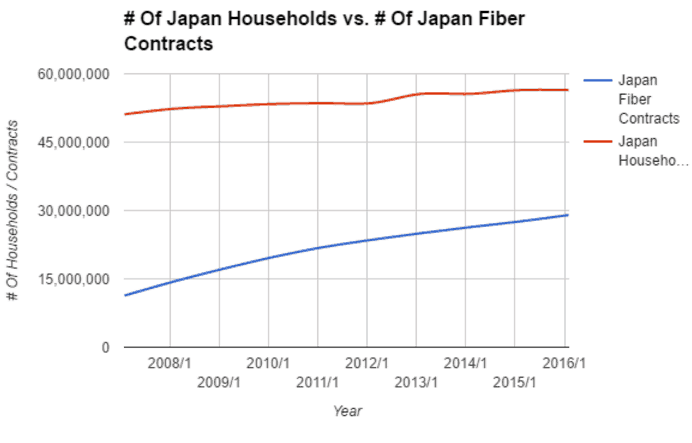 I was not able to get ARPU data specifically for Okinawa. However, in 2015, fiber ARPU was 5,490 yen for NTT East and 5,680 yen for NTT West. In comparison, Okinawa Cellular ARPU was 4,990 yen during the same period. Perhaps, the rapid market share gain was through price competition. That said, Okinawa is also the poorest prefecture in all of Japan, so it wouldn’t be particularly surprising if NTT’s Okinawa ARPU was below the 5,000 yen mark.

Since 2013, Okinawa Cellular has been operating a small vegetable factory. In 2016, the company opened a second factory. The factories produce vegetables like lettuce and basil on a small scale. The two factories combined produce approximately 45 kilos of vegetables per day. These vegetables are sold to Ryubo, an Okinawan company that operates 12 grocery stores.

Here is a little story about why Okinawa Cellular’s lettuce production means something to Okinawans: 90% of lettuce in Okinawa is “imported” from other parts of Japan. By the time lettuce gets to Okinawa, it’s no longer fresh. Additionally, when bad weather hits, prices skyrocket. The highest price was recorded last summer when 1 head of lettuce was selling for 1,300 yen (roughly $13 at the time).

The idea here isn’t necessarily to make vegetable production a core part of the business, but rather to leverage Okinawa Cellular’s resources to experiment with vegetable factories and pass the operational knowledge on to local businesses as a service. Additionally, Okinawa Cellular, along with KDDI and Ryukyu University, announced a coordinated effort to research IoT assisted Mango production. Basically, the group is developing a monitoring system for Mango production (like humidity, temperature, sunlight, etc) where users can monitor their Mangoes through their smart phones.

In addition to the agriculture business, Okinawa Cellular is engaged in the operations of Okinawa tourism website “Okinawa Clip” and online souvenir retailer “Oki-toku”. Now this may seem almost entirely unrelated to Okinawa Cellular’s core business, but CEO Hideo Yuasa explored the possibility that, with the progress of technology, it wouldn’t be so far fetched if Okinawa Cellular was operating a tourism/retail business integrated with AR/VR technology.

As you might already guess, operating businesses in different industries requires some degree of flexibility. In a Nikkei interview, CEO Hideo Yuasa described the importance of remaining nimble, especially in a mobile carrier industry where MVNOs creep in through low price strategies and big players compete on price and service. As a part of remaining nimble, Mr. Yuasa intends on keeping the balance sheet generally free of debt to allow for swift business decisions. He also hinted at the possibility of M&A.

Aside from the new business, investors can expect Okinawa Cellular to continue to hold a strong market position in the mobile carrier market. Additionally, the fiber internet business is a growth area, especially given Okinawa’s low penetration rate and Okinawa Cellular’s bundling of mobile and fiber contracts. 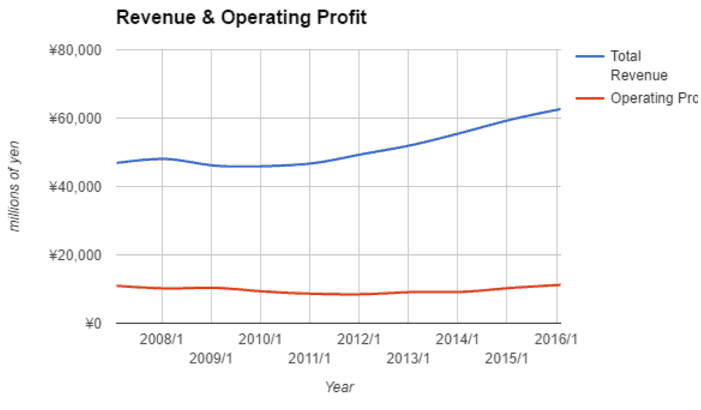 While top-line growth has been steady, margins have been shrinking, particularly in the mobile carrier business. ARPU figures have only started to stabilize in the past few years. This might be a leap into speculative territory, but I believe it is safe to assume that Okinawa Cellular’s mobile ARPU still has some room to fall, especially since it is still roughly 10% above the national average. Part of the decline will likely be offset by miscellaneous value-added services (membership program, cross-selling, “Au Wallet” credit cards, etc), which account for about 5% of total ARPU now.

For Okinawa Cellular, growth over the next several years will most likely come from the fiber business. The vegetable production facility, tourism website, and online souvenir retailer are all still small in scale and in its infancy. 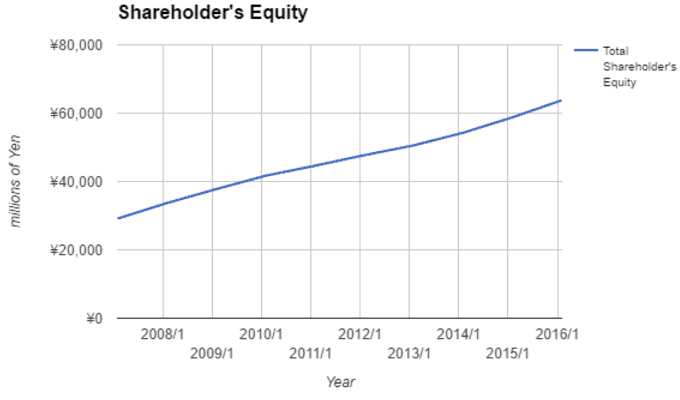 Despite the top-line growth not proportionately contributing to operating income growth, shareholder’s equity has gradually increased. That said, ROE for Okinawa Cellular went through a free fall from 2007 until hitting a low at 2013, at which ROE mostly stabilized around 10%: 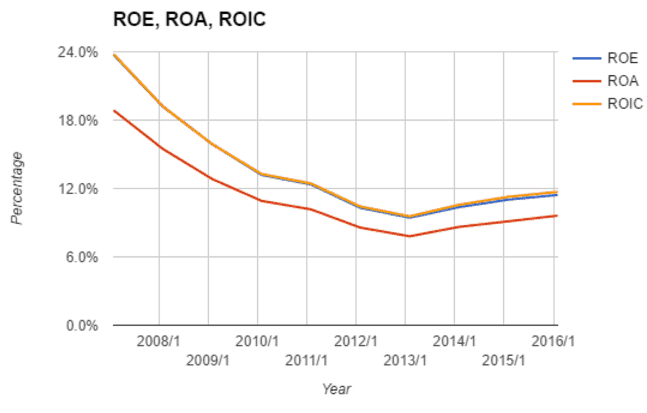 The good news is, much of the ROE was achieved with very little debt. ROIC has treaded alongside ROE. In fact, Okinawa Cellular has the cleanest balance sheet in the industry when comparing the equity to total asset ratio (a common balance sheet metric used in Japan):

This basically shows what percentage of total assets are “self-financed” so to speak. Here is a comparison of Okinawa Cellular along with the big 3 players: 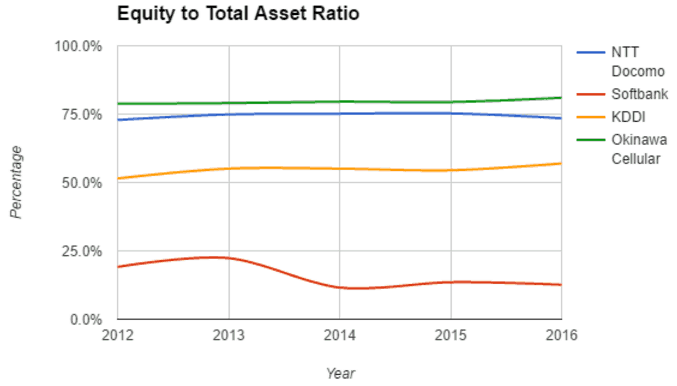 Additionally, here is how ROE figures compare (negative ROE is set to 0 for readability): 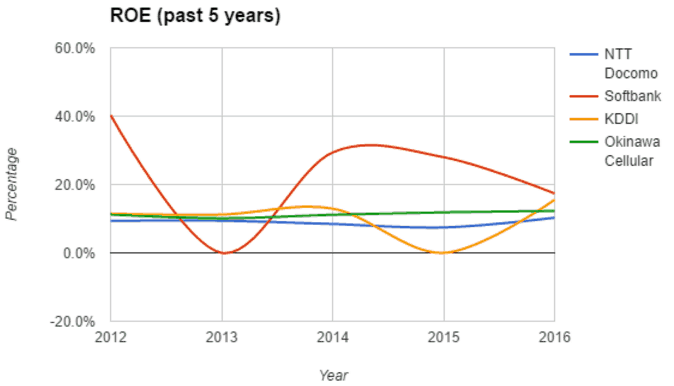 NTT Docomo and Okinawa Cellular, both of which have high equity to total asset ratios, has had the most consistent ROE figures.

Here is a rough calculation of why:

Mobile and fiber revenues combined account for approximately 42 B Yen. This is roughly in line with Okinawa Cellular’s 2016 revenue of 43 Billion.

In order to place a value on Okinawa Cellular, it is probably best to assume no growth.

If we assume that Okinawa Cellular maintains ROE at 10% over the next 3 years and the market values Okinawa Cellular at its 5-year historical 1.2 P/B, we are looking at a CAGR of 3.5% at today’s 3,555 yen per share price:

Along with San A (TYO: 2659), I believe Okinawa Cellular belongs in every investor’s “Wait until the price is right” portfolio. This is due to the company’s regional focus, which translates into strong market share. I believe the “right price” to initiate a position in Okinawa Cellular is 2,600 yen.