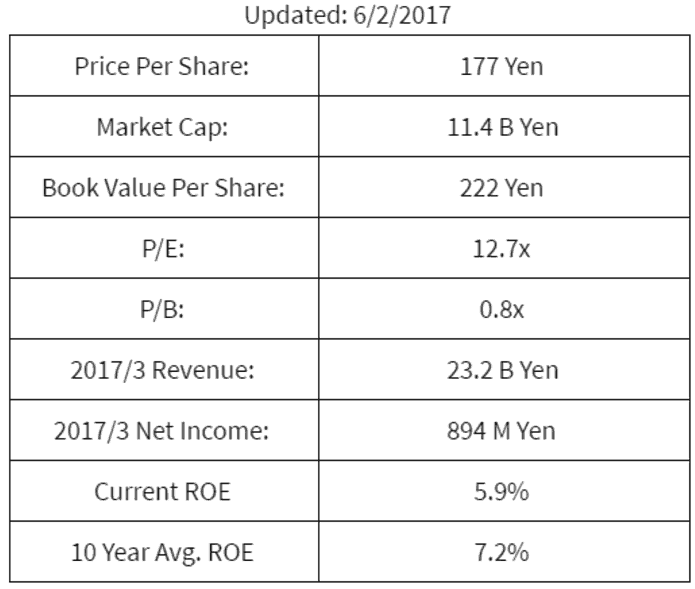 Takisawa Machine Tool was founded in 1922 when the Takisawa brothers built their first manual lathe. Since then, the company has been engaged in the manufacturing of machine tools, or “mother machines”.  Today’s key offerings include CNC Lathes, machining centers, drilling centers, standard lathes, factory automation cells, and factory automation systems.

Much of Takisawa’s products find homes outside of Japan, which is rather common for Japanese machine tool companies. Overall, Japan is a net exporter of machine tools by a large margin. In terms of annual machine tool production value, Japan is only behind China, and closely competing with Germany for the number two spot (more on this later).

A little less than half of Takisawa’s sales come from Japan: 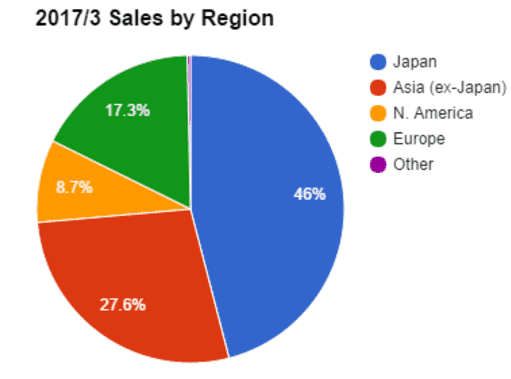 Top 10 Machine Tool Producing Countries in 2015 (in millions of US Dollars): As anyone might guess, China is also the largest consumer of machine tools by far. Here are the top 10 consumers of machine tools for 2015 (2016 figures are forecasts, in millions of US dollars): One look at the trade balance gives us an idea of who the technological leaders are. Here are the top 10 highest trade balances for 2015 (in millions of US dollars): Let’s use the information above and paint a better picture of the Japanese machine tool industry. Japan produced $13,489.5 M and imported $940.5 M worth of machine tools while consuming $5,804.5 M, which resulted in an export value of $8,625.5 M. In other words, of the $13,489.5 M worth of machine tools that were produced in Japan, 64% found a home outside of Japan. Assuming revenues and production values are proportionately equivalent, this information tells us that Takisawa’s 46% of Japanese revenues are actually more domestically concentrated relative to the Japanese machine tool industry as a whole, as only 54% of sales came from regions outside of Japan.

As a sidenote, Yamazen (TYO: 8051), a reseller of various machine tools (among other things), is Takisawa’s largest customer (12% of 2017/3 total revenues, 20% of domestic revenues). Approximately one-fourth of Yamazen’s production related machinery segment revenues are international. In other words, while Takisawa’s machines are sold to Yamazen in Japan, some of the machines may actually be resold outside of Japan.

Shifting the conversation back to the global environment, the machine tool industry reached a peak in 2011. Since then,  global machine tool consumption has slowed down: Historically, production value of machine tools may have been an adequate measure of a company’s business performance. However, the Industry 4.0 movement is taking the industrial manufacturing by storm. And this industry is highly dependent on machine tools.

In the industrial robotics sector, there are 4 big players: Fanuc (TYO: 6954), ABB, Yaskawa Electric (TYO: 6506) and Kuka. Pushing the Industry 4.0 movement forward, these companies have been partnering with IT companies to bring a new level of transparency to industrial manufacturing. Essentially, modern day industrial robots are connected to each other and the internet in order to ensure a smooth manufacturing operation. The heightened level of data transparency will increase demand for service parts and maintenance operations for robotics companies, as manufacturers would perform preventive maintenance before machines start break down and negatively impact entire production lines. I wrote more on this topic over on Seeking Alpha.

The revenues that come from service parts and maintenance operations of industrial robots will likely resemble that of heavy machinery, trucking, and automotive industries. When downtime costs a lot of money (machines only provide value when they are functional), owners tend to pay a premium price when things break down, especially if a breakdown in one machine comes with downstream consequences (e.g. underutilization of robots in processes after the failure point). Unfortunately, for smaller machine tool manufacturers like Takisawa, maintaining a global service network can be challenging.

Admittedly, for a small cap like Takisawa, it is difficult to find any information (even in Japanese). That said, annual reports are still available in Japanese, which I will use for surface-level assessment here.

Takisawa’s biggest revenue generator is CNC Lathes (78% of 2017/3 Sales), followed by CNC/Manual Lathes (11% of 2017/3 Sales). These machine tools service the airline, energy, automotive, and electronics industries. Takisawa does not present sales distribution by industry, but the exposure to airline industry gives us a clue on Takisawa’s technological positioning. This is because CNC machine tools used in the airline industry often require a high level of precision and the ability to work on various types of materials. It is safe to say that Takisawa is at least technologically competent.

The fluctuation of Takisawa’s revenues over the past 10 years looks roughly in line with global machine tool consumption, but with greater volatility: 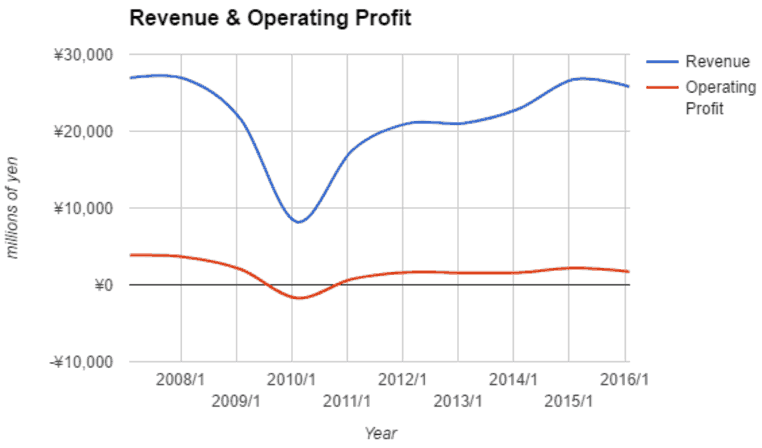 Though it is likely that most Chinese competitors have several years before they start eating into Takisawa’s revenues, Taiwanese and S. Korean competitors are at the technological doorstep. About two-thirds of Takisawa’s production takes place in Japan, which means that Takisawa has a high reliance on technological advantage in order to earn its keep in the global machine tool industry.

Production facility location aside, Takisawa’s overall revenue decline in the past two reporting periods (2017/3 and 2016/3) is largely a function of declining demand in China, Taiwan, and Thailand: A recovering Chinese demand is highly likely to translate into improved top-line performance for Takisawa. In contrast, a decline in automotive capital investment would negatively impact top-line performance, according to Takisawa’s 2016/3 Yuho filing.

Even without the Gross Profit margin decline and SG&A increase, ROIC for 2015/3 would be somewhere around 11~12% compared to 18.2% for 2007/3. The typical scenario in Japan is that an ever-increasing stockpile of cash drags ROIC performance, but this isn’t the case for Takisawa. Cash has remained roughly the same between 2007/3 and 2015/3. In fact, the key difference between current asset values between the two periods is inventory.

Japanese companies did not start breaking down inventory on the balance sheet into finished, work-in-process, and raw materials until 2009. A 2009/3 to 2015/3 comparison shows a 57% increase in inventory, and a particularly high 67% increase in work-in-process inventory. I have not identified what the cause of this increase is. However, it is likely that suboptimal operational efficiency / inventory management is part of the problem.

The good news is that the management team recognizes this problem and addressed it in the company’s 2016/3 investor presentation. The bad news is that the solution is to implement IT systems for manufacturing process control and visibility. The investor presentation hardly presented any detail, but mentioned that the system would visualize production progress (good), and also that the system would identify out-of-stock parts (why hasn’t this already been done?). Again, the investor presentation did not go into detail, but it is difficult to gain confidence in a machine tool manufacturer whose manufacturing process has not involved a basic function like identifying out-of-stock parts. Maybe I am extrapolating too far, but one inefficient solution to bad inventory management is buying more parts, which would explain the significant  increase in inventory over the last decade.

Other Factors At Play

Takisawa’s 2016/3 Yuho filing mentions the decline in automotive industry’s capital spending as a risk, which suggests that the company is highly dependent on the automotive industry. This is not a surprise given the scale of Japanese automotive manufacturers. It is important to note that US car sales have reached a historical record in 2016. At the same time, US car loan values have surged over $1 Trillion. Concerns over subprime borrowers’ ability to pay have recently been the hot topic in auto lending. While this is nowhere near the subprime mortgage crisis ($10 Trillion), used cars flooding the market and lenders tightening up the wallet means slow new car sales. This can reduce capital spending by Japanese auto manufacturers, which would negatively affect Takisawa’s performance.

Global consumption of machine tools has sharply declined over the past few years. Despite the decline, Takisawa has been able to maintain a healthy level of revenue, thanks to a healthy automotive industry. However, the operational / inventory drag has resulted in a capital efficiency decline: Over the next couple of years, we should be able to observe how effective Takisawa management’s push for operational efficiency is. A stabilizion or decrease in work in process inventory (as a proportion to revenues) would mean increased utilization of assets.

Fanuc owns about 4.5% of Takisawa. It is unclear whether Takisawa and Fanuc are jointly working on anything as neither Takisawa or Fanuc management mentions anything about working together. That said, it would be interesting to see whether Takisawa adopts a Fanuc-like manufacturing philosophy. Essentially, Fanuc conserves production space by using a common set of parts for various products. This increases utilization of Fanuc’s factories, which results in the company’s industry-leading gross margins. 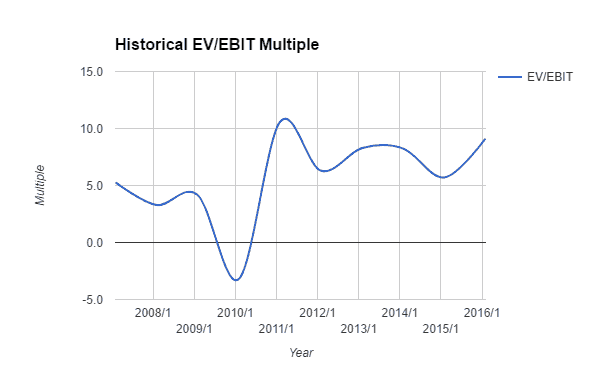 At this point, it is safe to say that Takisawa is technologically competent, though with operational issues. Takisawa’s business performance going forward would be largely dependent on the management team’s ability to improve operational efficiency. Additionally, Takisawa would have to either maintain a technological moat, expand production into low cost regions like China, Taiwan, India, etc with its current technological position, or do some combination of both to remain competitive on price in the global market.

Fortunately, Takisawa has a healthy balance sheet (20.5% total debt / total capital) and a decent warchest (7,171 M Yen in cash). At a 0.8x P/B, Takisawa may seem like a bargain, but utilization of the assets on book have seen a decline with no end in sight (so far). All that said, Takisawa is still profitable and healthy. I would consider investing in the company at 5x EV/EBIT, or about 114 yen per share. Takisawa’s share price reached this level  in 2016 (lowest price was 107 yen per share).