Before I get started: I received feedback suggesting that I should add action price points to my posts. The short answer is that I will not be adding price points. The intention of these quick idea posts are to leverage my language fluency to uncover interesting Japanese companies in English. I did, however, incorporate other feedback (like including basic historical financials).

When Procter & Gamble decided to sell disposable diapers in China (1998), the company encountered one major problem: Disposable diapers weren’t a thing in China. The cultural norm was to either wear cloth diapers or nothing. Instead of visiting supermarkets to negotiate shelf space, P&G kicked off by introducing the concept of disposable diapers.

According to Zion Market Research, the global baby diaper industry accounted for $46.5 Billion, and is expected to reach $67+ Billion by 2022. The key driver for growth being the increase in disposable income in emerging economies. Some of the major players in the industry include: Procter & Gamble, Kimberly-Clark, Unicharm, and Kao.

There are several main diaper machine makers on planet Earth: US-based Curt G. Joa, Italy’s Fameccanica, and Japan’s Zuiko (TYO: 6279). I haven’t come across market share data other than what Zuiko has provided (see below).

According to the company’s 2017/2 earnings presentation, Zuiko holds a 80+% domestic share in diaper machines and a 30+% share globally. The way the industry operates isn’t so much that the diaper machine manufacturers produce a standard machine to sell to all customers. Rather, the machines are customized to meet customer requirements. A 2008 post from a Japanese job search site noted that 80% of Zuiko’s employees are engineers.

To be clear, diaper machines aren’t the only thing manufactured by Zuiko. The company also builds feminine pad machines, pet sheets, wet wipes, etc. Basically machines for products that require similar properties to that of diapers. 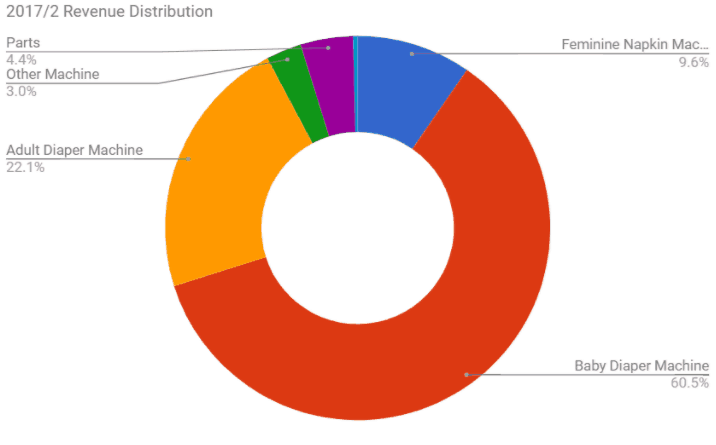 Though roughly 50% of 2016/2 revenues were generated outside of Japan, Zuiko is disproportionately exposed to Japanese companies, which accounted for 85% of Zuiko’s business in 2016/2. The management team plans to get the Japanese:International company split to 60:40 by 2020.

Currently, Zuiko has production facilities in Japan, China, and Brazil. The company’s strength is in baby diapers, which has performed well in China. The management team plans to cross-sell feminine pad and adult diaper machines, with a focus on Asia. According to the 2017/2 earnings presentation, the biggest challenge isn’t so much the other major machine manufacturers, but emerging Chinese competition, which is a fight for price. Most of Zuiko’s 2017/2 capex went toward expanding its Shanghai production facility.

I decided to incorporate some of the feedback I received on my previous post about including historical financials on these posts. I went to Guru Focus and downloaded basic information. The keyword is “basic” here. If there are other data points you would like to see, please let me know. I will add them to future posts if they are easily and readily accessible. The presentation of the data could probably be better to, so any pointers on that are welcomed! Reminder: This post is not intended to provide action price points 🙂

One of Zuiko’s key customers, Unicharm (TYO: 8113) has been flexing muscles in Central and South America over the past few years. This is currently a negligible portion of Zuiko’s sales. It’ll be interesting to see how Zuiko develops in this market, especially since the company built a production facility in Brazil.

Less than a month ago, Nippon Shokubai (TYO: 4114), the world’s largest producer of superabsorbent polymers (SAP), announced that it has developed a way to produce superabsorbent polymers using palm kernel shells. The company projects that this technology would reduce SAP production costs by up to 70%. I won’t go too deep here, but the price of the current material used is largely affected by oil prices. Nippon Shokubai expects commercialization after 2020.

Nippon Shokubai is already the largest SAP producer in the world. That said, you can probably guess that the company’s SAP share in Japan is disproportionately larger than foreign competition. With Zuiko’s exposure to Japanese companies, it’ll be interesting to see how this new technology affects the global diaper market, and how it trickles down to Zuiko and its customers’ performance.

Overall, it looks like a bet on Japanese diaper manufacturers is a bet on Zuiko. The management team wants to attract more foreign manufacturers, but it doesn’t seem like they’ve figured out how to go about it (judging by the 2017/2 earnings presentation). The Chinese emergence of low-cost machines is obviously a threat, especially for low-end diapers. The 35+% decline in sales over the last two years in Asia is concerning as well. That said, management is projecting a 20% top-line improvement in baby diaper machine sales for 2018/2. It would be a miracle to see that sort of recovery without an increase in Asia sales. I would need to figure out what Zuiko is doing about Chinese competition, other Asian markets, C & S America markets to have a better idea as to whether Zuiko would make for a compelling investment opportunity or not. Whether it is possible to dig up this information is a separate issue.