Today’s post will be short and sweet, covering what is the far eastern cousin of a company familiar to most readers here: Morningstar Japan (TYO: 4765). Morningstar Japan commenced operations in 1998. As you might imagine, the company offers many services similar to that of the original Morningstar – services like data feeds, investment planning system, investment advisory, etc.

What caught my eye with Morningstar Japan was the fluctuating/declining revenues between 2009 – 2012, but consistently increasing operating income. Over the 9 year period, the company grew its top line at 6% CAGR and its operating income at an impressive 19% CAGR.

Now, the business performance and revenue growth is all fine and dandy. However, I have a difficult time understanding the company’s various service offerings (it appears they have hundreds of them). I think some investors are comfortable taking the basket approach and looking at the offerings as a whole (which I occasionally do myself), but I’m too unfamiliar with Morningstar Japan’s businesses at the moment.

Another attention-grabbing fact, and this might generate more interest from the western world, is that Morningstar Japan’s market cap is less than 10% of Morningstar US ($256 million MS Japan vs. $3.5 billion MS US). And it gets better from there. The current dividend yield is at 2.5%. 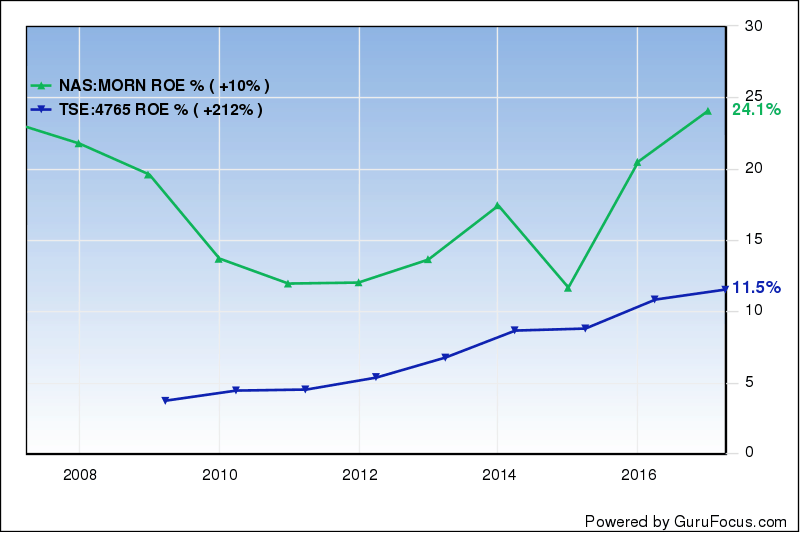 However, GuruFocus has a neat metric called the Joel Greenblatt ROIC. For those who are unfamiliar with Joel Greenblatt, I’d recommend reading his book, The Little Book That Beats The Market. Mr. Greenblatt developed his own way of measuring ROIC. With the Joel Greenblatt ROIC, the numerator of the metric is EBIT and the denominator is net working capital + net fixed assets. I find this very useful for analyzing Japanese companies. Often times, Japanese companies have a perfectly healthy operating business with a pile of cash on the balance sheet, which results in mediocre business performance if traditional metrics are used. Generally speaking, I consider a 10% ROIC (traditional) to be decent. 20% is very healthy. Morningstar Japan and Morningstar US are both astronomical at 2600% & 158%. Perhaps this isn’t particularly surprising for investors who regularly analyze asset light businesses. Admittedly, Morningstar Japan only shows 657% Greenblatt ROIC on a TTM basis. Nevertheless, operating performance is strong, and this isn’t reflected on an ROE basis because of mount cashmore on the balance sheet:

With Morningstar Japan’s impressive business performance, investors accustomed to analyzing asset-light businesses, internet heavy businesses ought to look into the company. Personally, Morningstar Japan is a bit out of my wheelhouse. That said, I’ll probably look into this company anyway. Perhaps I’ll make a more comprehensive post at another time.