Okamoto (TYO: 5122) is Japan’s #1 condom maker. According to various sources, which were both outdated (5+ years old) and unreliable (internet forums), Okamoto holds a 50% share in the Japanese condom market. The key competitors are Fuji Latex (TYO: 5199) and Sagami Rubber (TYO: 5194). Together, these three companies make up for about 90% of Japan’s condom market. Dominance in the Japanese condom market, however, is not particularly relevant anymore, and here is why.

Okamoto kicked off by manufacturing condoms and raincoats back in 1934. Fast forward 80 years and Okamoto’s product lineup includes everything from industrial products like protective films, greenhouse vinyl, automotive interior, etc to lifestyle products like condoms, moisture absorbents, and cleanroom gloves. Today, the company’s industrial products account for more than 60% of revenues and 55% of gross profits.

Generally speaking, industrial products has provided more stability for Okamoto, both from a revenue and margin perspective. Meanwhile, the company’s lifestyle products delivered inconsistent performance. Ten years ago, both segments generated about the same amount of revenues. While industrial products have increased revenues by 37% (3.2% CAGR) since, lifestyle product revenues fell by 12% (-1.2% CAGR).

What’s most interesting about Okamoto is this: 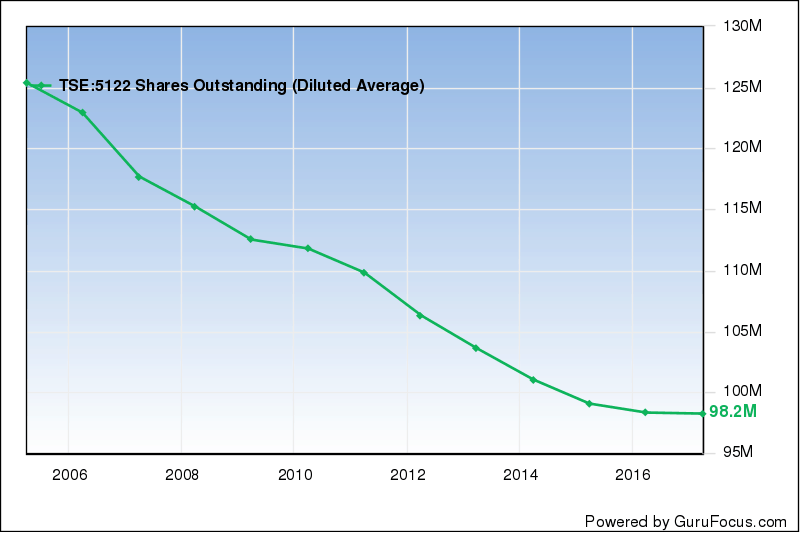 Over the last 10 years or so, Okamoto has traded around 10x EV/EBIT. Not particularly low for Japan, but certainly not high either. On a per share basis, 10 year revenue CAGR is at 3% and 10 year EBIT CAGR is at 20%. Today, Okamoto trades at 9x EV/EBIT with a relatively clean balance sheet (equity/asset ratio is at 0.6).

To be sure, Sagami Rubber’s 10 year per share EBIT CAGR is right up there with Okamoto at 22%. Revenue CAGR was below Okamoto at 2.3%. That said, the three fierce condom competitors’ business areas don’t necessarily overlap. Though Okamoto’s cash pile is not astronomically high, it has plenty of room for dividends. The company historically maintained a 7.5 yen per share dividend, which started increasing in 2015. Today, Okamoto pays 15 yen per share, which puts the payout ratio at 18%. Current dividend yield is 1.3%.

Before taking a closer look, I had only known Okamoto as the familiar condom brand. However, there is clearly much more to the company. Admittedly, I don’t know nearly enough about all the moving parts that drive Okamoto, but it appears to be a stable company which stood the test of time. The share buybacks that precede Japan’s push for corporate governance reform is particularly encouraging, too.