Hokuyaku Takeyama Holdings (SSE: 3055) is a drug/medical equipment wholesaler and pharmacy operator. I came across the company a few weeks ago when digging through drug store/pharmacy related industries. Hokuyaku trades cheaply compared to industry peers, probably because it trades on the Sapporo Securities Exchange (SSE).

Sapporo is the capital of Hokkaido, the northernmost prefecture of Japan. The name may sound familiar to beer fanatics: You guessed it! There aren’t many brokers that let you trade on the Sapporo Exchange.

In terms of accessibility, the Tokyo Stock Exchange and Osaka Exchange (both part of Japan Exchange Group) along with the Nagoya Exchange are considered Japan’s “Big 3” exchanges and are generally accessible. Sapporo and Fukuoka Exchanges are less accessible.

According to Minkabu (popular Japanese stock website), here are some of the major brokers that handle SSE-listed stocks:

Major brokers that DO NOT handle SSE-listed stocks:

Why am I writing about this?

Initially, I did not plan on writing about Hokuyaku, mainly because of the lack of access, but also because I didn’t find the company particularly interesting aside from its low price. Then, I talked to Jan Svenda, who specializes in OTC stocks. During our conversation, Jan explained why he researches OTC stocks, which I will (probably reductionistically) summarize.

Many investors avoid OTC stocks. Accessibility is an issue. Data is often difficult (and sometimes impossible) to obtain. Organized data is even harder to come across. Occasionally, you’ll run into a scam or three. However, if you hang tight and go the extra mile (like Jan does), you’ll find meaningful investment opportunities.

Jan changed my mind about writing this piece. I couldn’t help but think that Hokuyaku is undervalued relative to industry peers because it is on the less accessible Sapporo Securities Exchange. For most readers, Hokuyaku is probably a useless idea. However, for a select few readers who live in or frequently visit Japan, it might be an attractive investment opportunity. I know at least three readers who can meaningfully benefit from non-big 3 exchange listed stocks; two of which I met in Tokyo Narita Airport over a long layover last month (you guys know who you are!).

Hokuyaku doesn’t need to be a great company to be a good investment, mainly because it trades at negative EV. The company has remained profitable since fiscal 2007, which is as far back as the Hokuyaku IR page goes. Gross and operating margins have remained rather stable at 7% and 1%, respectively over the past 5 years.

Some of the major drug wholesalers include:

All of these companies trade at comparable multiples, except for Hokuyaku: 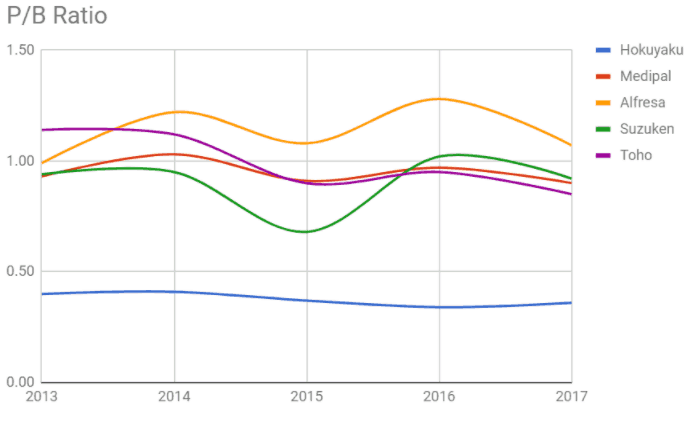 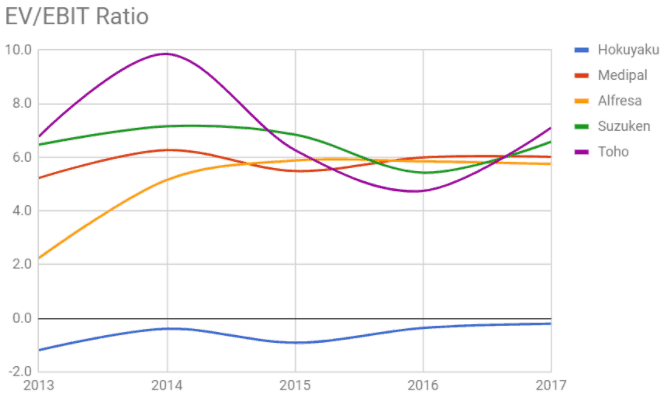 Presumably, drug wholesale companies ought to see some efficiency gains as they grow. I thought Hokuyaku’s business performance would be significantly inferior to the other four companies, but it wasn’t: 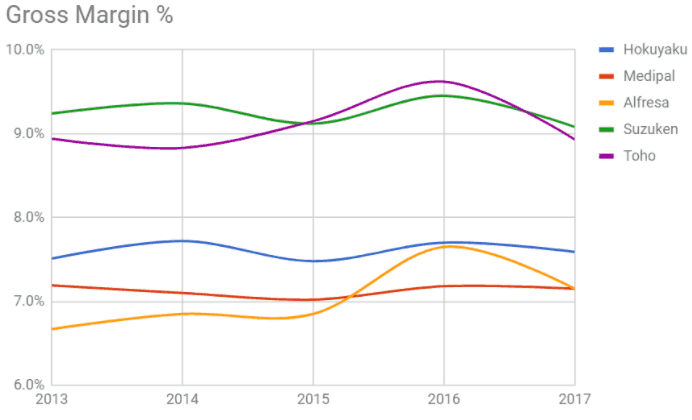 Hokuyaku operating margins is a hair above Suzuken’s, but the spread across the 5 companies is a meager 0.5%.

What was surprising to me is Hokuyaku’s balance sheet: Much like the drug store and pharmacy industries, the drug distribution industry is moving toward consolidation. M&A activity is on the rise and partnerships are forming. In fact, Hokuyaku Takeyama exists as a result of Hokuyaku and Takeyama (two separate companies) merging in 2006.

I wondered whether Hokuyaku lagged in revenue growth, but that doesn’t seem to be the case either: Company specific investor sentiment is probably neutral. One of Hokuyaku’s subsidiaries had a data breach in October where 600,000 patients’ data was leaked. This is clearly bad, however, the company also bought back shares in November (~2.5% of outstanding shares) at 722 yen per share. Overall, Hokuyaku’s share price has appreciated a little over 10% in the past two months.

Based on surface level research, Hokuyaku seems to trade at a discount relative to its peers despite comparable business performance and a considerably stronger balance sheet. My best guess is that the discount is due to Hokuyaku’s relative inaccessibility/illiquidity. Current prices and business performance makes Hokuyaku an attractive M&A target. Unfortunately, the company is out of reach for many investors.

Investors who are serious about investing in Japanese small caps ought to consider opening a brokerage account in Japan to take advantage of some of the opportunities presented by less liquid/accessible stocks.

P.S. – I will be in Fukuoka (Hakata) in a couple of weeks on business. I have the evening of December 20th open if anybody wants to grab a bite!