To be fair, 2017 wasn’t all bad for Mitsubishi Heavy. Despite the cumulative 283 billion yen one-time losses, Mitsubishi Heavy is still expected to report a profit, thanks to its sleeping real estate assets. Additionally, its H2A rocket recorded 6 successful launches (31 consecutive successes) along with its first “dual launch” – putting two satellites into orbit with one rocket. Still, Mitsubishi Heavy had a rough few years and the 5,000 billion yen ($46 billion USD) sales target that the company hoped to achieve by fiscal 2017 looks like it’ll have to wait. The share price, which halved over the past two and a half years, seems to reflect the overall negative investor sentiment: 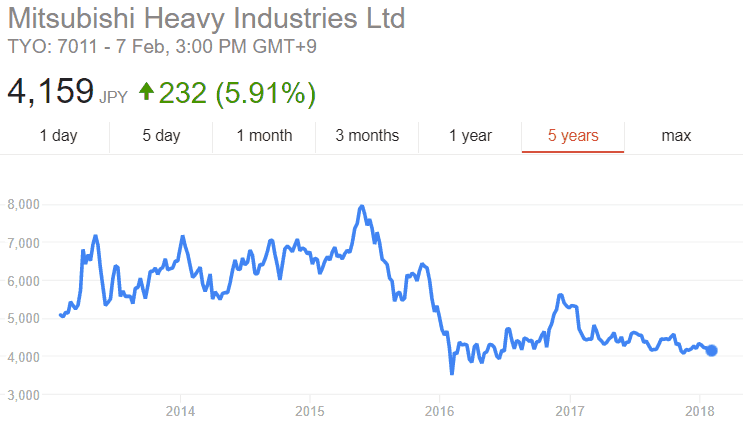 Changing dynamics within the Mitsubishi group

What caught my attention about the recent developments isn’t so much the turmoil itself, but the Mitsubishi Group’s stance toward the turmoil. Mitsubishi is one of the major “zaibatsu” (pre-WWII Japanese conglomerate) which was separated into several smaller companies at the end of World War 2. Today, the group is often referred to as “Mitsubishi Keiretsu” or Mitsubishi business group in plain English. Even after the formal separation, like many of the other keiretsus, the Mitsubishi Keiretsu maintained close relationships and helped one another during difficult times.

Perhaps Prime Minister Abe’s Stewardship Code is taking effect. Mitsubishi UFJ Trust and Banking Corporation rejected a proposal to put Mitsubishi Heavy’s CEO and Mitsubishi Corporation’s Chairman of the Board as outside directors on Mitsubishi Automotive’s board.

If there is one thing that became clear from recent events and dynamics, it’s that Mitsubishi Heavy can no longer comfortably depend on the Mitsubishi Keiretsu during difficult times. Fortunately, with Aida Cruises’ second ship completed in May 2017, it’s likely that Mitsubishi Heavy’s losses from shipbuilding operations will be reduced considerably or eliminated going forward. That said, life isn’t easy yet with management expecting full fiscal 2017 orders to come in considerably lower for its Power Systems and Aircraft, Defense, and Space segments: Still, with the weight of the expensive cruise ships mostly lifted, Mitsubishi Heavy management must be somewhat relieved.

Today, Mitsubishi Heavy trades below book at 0.71x P/B and at an unadjusted EV/EBIT multiple of 11x. Though the 7th delay for the Mitsubishi Regional Jet isn’t encouraging, it’s a relatively small part of Mitsubishi Heavy’s business. It’s also worth noting that the successful dual launch for the H2A rocket is probably a bigger deal than most people realize. Mitsubishi Heavy certainly isn’t the first to do this (France’s Arianespace has done it many times). In simple terms, the cost for a customer to launch a satellite just got cut in half. Overall, the near-term future still looks a little grim. An uptick in Power Systems orders for fiscal 2018 might be the extra “umph” that Mitsubishi Heavy needs to get back on track with its overdue 5,000 billion yen sales target.