Note from Clay: This is a guest post from portfolio manager Brian Grosso. The idea was originally written on February 6, submitted on February 12, 2018 and published with a delay for technical reasons. Hope you enjoy! 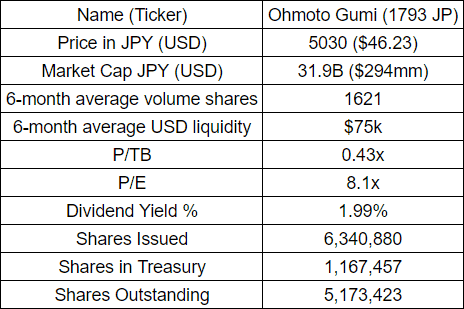 Ohmoto Gumi (TSE: 1793) is cheaper in a liquidation scenario than as a going concern.  If I take cash and investments at 100%, receivables at 90%, other current assets such as unbilled construction costs and prepaids at 20%, land at 50%, other PP&E at 20%, and long-term guarantee deposits at 100%, all liabilities at 100%, and assume they generate average revenue over the next 3 years of 85B yen (12% less than LTM but in line with 3, 5, 10 year average) and a 1.7% net/FCF margin on that revenue and that those 3 years of interim cash merely accumulate to liquidation value, the stock is worth 8990 in 3 years and, discount back at 10%, 6750 today.  That implies annual returns over the next 3 years of 21%.  That number could be higher if the value is realized quicker than 3 years or they continue to repurchase shares at what currently looks like a big discount.  Note that 1/5 of “shares issued” are in the treasury currently and they’ve done almost all of those repurchases in the last 10 years, some very recently.  They also pay a 2% dividend.

Ohmoto Gumi is a mid-sized construction company in Japan with 800 employees and roughly $1B USD in revenue.  The company was established about 110 years ago.

They operate nationwide and have expertise public works like dams, tunnels, and airports, but do pretty much everything.  They have built hotels, hospitals, airports, dams, bridges, stadiums, railways, office buildings, and so on. Right now, about 2/3 of orders received are for public works.

In my opinion, it is cheap for all the usual reasons.  It’s an extremely boring business and not a particularly good one either.  5 and 10-year geometric average ROTCE are just 5.2% and 2.4% respectively.  In situations like this, this number is often suppressed by the big cash balance but even if I take their LTM operating income of 6B JPY over invested capital of 44B, calculated as total assets 97B – cash and securities and deposits 23.1B – current liabilities 29.8B, that’s only a pre-tax ROIC of 14%.  And over the last 10 years revenue is down about 1% per year and capital allocation suboptimal holding the huge net cash position with no debt.

There is next to no information online about the company.

The 100-share minimum trading lot makes the minimum purchase size about $5k, which is too large for many individual investors.

It is a cyclical business that seems to be doing better-than-average right now, which creates foreboding for the years to come.

Investors are concerned about prospects for the Japanese economy.  Any broad economic weakness would have a magnified impact on the construction industry.  The population is declining.

Investors are worried about devaluation of the yen and reluctant to accept the currency exposure.  Hedging it is costly.

Some may argue a liquidation value exercise is futile with these small Japanese businesses because they will never be liquidated, and the value never realized.

Shinzo Abe’s three arrows, particularly the corporate governance one, has been a game changer.  There is a sense of hope and urgency, both among the investment community, and seemingly the management of Japanese companies, to improve governance and make things more efficient.

Historically foreign activist investors have utterly failed in trying to effect change at insular Japanese companies.  This has been the case for the last 2 decades.  But now, because the directive to improve governance is coming from within- from the leader of Japanese society, rather than some arrogant American capitalist trying to flip the stock in a year or two and okay firing half the workforce, Japanese companies are listening and prominent activists like Dan Loeb are succeeding.

Companies are paying record dividends and repurchasing record levels of stock.  Ohmoto Gumi is a prime example of that.  A virtuous cycle is created as the rising stock prices inspire confidence but also cause companies holding stocks in other Japanese companies (widespread in Japan) to report increased values of their holdings.  The increased dividends lead investors to reinvest in other securities.  Management buyouts and even unsolicited third-party buyout offers are occurring surprisingly frequently.  I have witnessed several.

The 2020 Tokyo Olympics have been a boom for Japanese construction companies and while this construction work will fall off in a few years, I don’t think we are at that point yet nor do I believe Japanese market participants operate at a high enough level of thinking (second level, third level, etc.) for stock prices to anticipate this until closer to the falloff.

To be clear I don’t think the stock will double tomorrow, however, a lot can happen in 3 years.