In its Q3 2017 earnings call, Nintendo announced its September 2018 launch of the Nintendo Switch Online service. Though video game related websites quickly picked up on the news, the investment community apparently missed it – probably because the earnings call offered more tangible information for investors to chew on, like the Nintendo Switch becoming the fastest selling video game console in US history.

Interestingly, prior to its launch in March 2017, folks were worried the new console would be another dud like the Wii U. Even industry executives commented that Nintendo had no place in the console business.

The Switch Online service  is not an earth-shattering move for Nintendo, especially given its competitors (Microsoft’s [MSFT] Xbox and Sony’s [TSE: 6758] Playstation) already monetize online services. If anything, the launch is overdue. That said, I am a little surprised the investor community has not picked up on the announcement, especially given Nintendo’s large following. The last Nintendo article written on Seeking Alpha when I checked today (March 3, 2018) is from January 25, 2018. Personally, I think the announcement said a little more than “Hey, we are going to have paid online services too!” and investors probably ought to take a closer look.

The price is set at $19.99 per year. In comparison, Microsoft’s XBox Live Gold and Sony’s Playstation Plus are both available in the $50 to $60 per year range.

Besides mentioning basic features – like online gameplay, classic games library, and social sharing  – Nintendo did not give out too many details:

Presumably, Nintendo will be chasing Xbox Live Gold and Playstation Plus in building out basic features. Because Nintendo is Nintendo, I would not be surprised if they came up with one or two off-the-wall features as well.

To be sure, online services are not completely new to Nintendo. Just as the image above reads, Nintendo already offers some online services. It is merely becoming a paid service with more offerings in September.

Switch Online will not be a significant source of revenues

Considering Nintendo stock was very hot over the past year, I would not be surprised if investor interest is cooling down, particularly in the value camp. 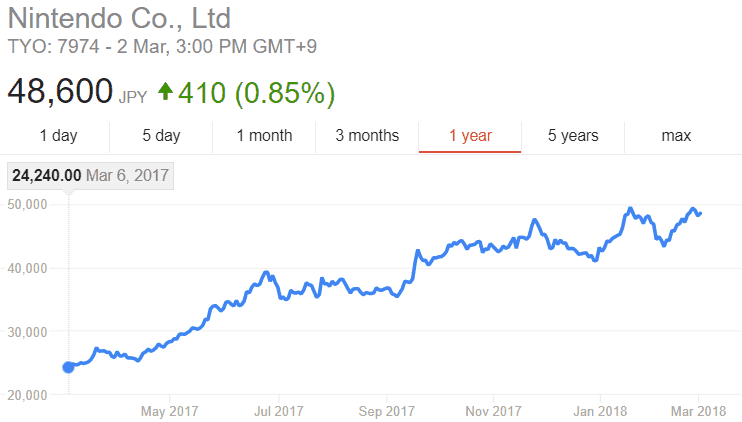 It is not easy to make a growth case for a company at Nintendo’s scale to justify a 30x EV/EBIT multiple. To be clear, that is not what I am trying to do here. I am merely intrigued that Nintendo finally appears ready to modernize its old, one-off sale business model, yet nobody seems to be talking about it.

Frankly, a little bit of math would show that Switch Online would not add a ton of revenue, even if half of Switch players signed up. As a reference, Sony sold a cumulative 57.1 million Playstation 4 hardware units and had 26.4 million Playstation Plus subscribers at year-end 2016.

Back to the Nintendo Switch. First, we will make a projection on how many total Switch units will be sold by the end of fiscal 2018 (March 2019).

In an interview with Kyoto Newspaper, Nintendo CEO Tatsumi Kimishima said he is hoping to achieve over 20 million in unit sales for fiscal 2018. 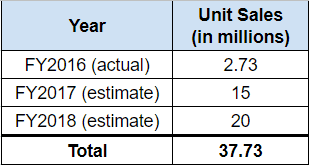 With subscriptions costing $20 per year, total unit sales at 37.73 million units, and half of the units having Switch Online, we can get an idea of how much revenue to expect:

I think this is a rather optimistic, but not entirely unrealistic scenario given Switch’s popularity and lower subscription price.

Why is Switch Online significant?

With the Xbox One and Playstation 4, you can play Triple A titles like Call of Duty, Battlefield, and Grand Theft Auto, published by major third-parties like Activision (ATVI), Electronic Arts (EA), and Take-Two Interactive (TTWO). Additionally, you can connect the unit to stream movies on Netflix, watch funny cat videos on YouTube, listen to your favorite online radio station, and the list goes on.

And then you have Nintendo.

Some people point to Wii U’s weak install base for Nintendo’s lack of third-party video games, but the company has gone on its own path for quite some time. This can be attributed to Nintendo’s craftsmanship, which goes beyond producing video game hardware and software. Rather, the company produces both in order to create the whole gaming experience.

Take a look at the evolution of Nintendo’s game controllers and compare it with Microsoft and Sony. If there is one thing that pops out, it is Nintendo’s noticeably different controller layout for every console. In many ways, Nintendo’s progress has revolutionized video game development. Here is a perfect example on how the Nintendo 64 (mid 1990s) revolutionized 3D game design. Now take a guess: How many game developers do you think would want to learn a completely different, new way to design games every 5 to 10 years?

Sorry to disappoint, but I don’t have an exact answer. My best guess is that there aren’t many.

When you play the same triple A title on the XBox One and Playstation 4, the gamer’s experience is more or less the same. Both systems’ controller layouts are similar and the basic layout for both have remained the same since inception.

In case you are wondering why I am explaining all of this, it is because Nintendo’s real product is the whole gaming experience. The Nintendo Switch, with its record-breaking unit sales, is already hard to ignore for third-party developers.

Third-party developers can port their games to the Switch without much change.  Either that, or they can add functionality to leverage the Switch’s unique controller layout to design a new gaming experience using the same basic theme of their original game. While Nintendo is busy playing a different game, the XBox One versus Playstation 4 console battle tends to revolve around which console has better network connectivity, graphics, and price.

This puts Nintendo in an interesting position. Nintendo is not really in direct competition with Sony or Microsoft in the same way the two companies are going against each other. Soon, Nintendo will have its first serious internet-connected console at a scale that it has never seen before.

I was surprised the investor community did not seem to pick up on Nintendo’s announcement because of how the video game console landscape is structured. Sure, Playstation and XBox both have exclusive games, but both consoles rely heavily on third-party developers for content. Meanwhile, the gaming experience has more or less remained similar since inception and both consoles are going head-to-head in competition. In contrast, Nintendo has relied on bringing a whole new gaming experience with each console through internal hardware and software development.

The console war is mainly between XBox and Playstation, then you have Nintendo doing its own thing with the Switch. Hence, it makes perfect sense for a gamer to have a PS Plus or a XBox Live Gold subscription while having a Switch Online subscription, simply because the Switch is different. Why aren’t more investors intrigued by this?