Index inclusions drive buying demand as many financial products are linked to indices. There’s even a term for the elevated buying demand when a stock is newly included in the S&P 500: The S&P phenomenon. This is common knowledge, but I’ve never heard of a western investor taking a similar approach in Japan, so I figured I’d look into it.

Though the information is publicly available (even in English! – Nikkei 225, TOPIX), most investors probably are not aware that both Nikkei 225 and TOPIX indices only consist of companies traded on the First Section of the Tokyo Stock Exchange.

It is difficult to determine which stocks get picked for Nikkei 225; apparently it is based on “liquidity” and “sector balance”. On the other hand, when a company is listed on the First Section of the Tokyo Stock Exchange, your typical TOPIX index fund automatically buys shares.

In July of 2017, Nikkei published an article mentioning Japan’s Government Pension Investment Fund’s (GPIF) TOPIX focused domestic equity portfolio. When the article was written, the GPIF had about 30 trillion yen ($282 B USD @ 1 yen = 0.0094 USD) allocated to domestic equities (most of which was pegged to TOPIX). As a reference, the total market capitalization of the First Section of the Tokyo Stock Exchange was at 596 trillion yen ($5.6 T USD) at the end of July 2017. Assuming 100% of the GPIF domestic equity portfolio was pegged to TOPIX, the GPIF alone would’ve accounted for 5% of TSE First Section’s total market cap.

I didn’t go through and aggregate all of the TOPIX index funds, but GPIF’s deal was enough to convince me that a new TSE First Section listing warrants a closer look.

The obvious path to a First Section listing on TSE is an IPO. Here are the listing requirements:

Notice that aside from the First Section, we have the Second Section of TSE, Mothers, JASDAQ Standard, and JASDAQ Growth. Here is a bit of information on each of the other sections.

Mothers – This is actually an acronym which stands for “Market of the high-growth and emerging stocks”. As the name expresses, the focus is on the up and coming companies. Notice that there isn’t a profit requirement for this section.

Here are the number of companies listed in each section:

Forget about the First Section IPO

What I want to focus on is more about “Section Transfers” from other sections to the First Section of TSE rather than the more obvious, well-covered IPO.

Why? Because  the First Section listing requirements for section transfers are more relaxed than a straightforward IPO.

The details of reassignment can be found here, but I outlined the key differences below:

* Note that there are two separate market capitalization requirements on the basis of tradable shares AND listed shares.

Assignment to First Section from Mothers:

** Note – There are two approaches of reassignment from Mothers to First Section: One is based on sales and the other is based on market capitalization.

Assignment to First Section from JASDAQ:

Now, companies cannot IPO on the Second Section on Monday then move up to the First Section on Tuesday. There is a timing requirement: My general belief is that value is its own catalyst, but with the way these listings (and its linked financial products) are structured, it’s hard to deny the fact that a First Section listing comes with benefits. Incorporating this into your value investing approach ought to yield some interesting opportunities.

Go back and take a look at the listing requirement for each market/section. The first criteria is the number of shareholders. In order to list in the First Section, a company needs 2,200 shareholders. To get to the Second Section, 800. Mothers and JASDAQ only require 200.

Now look at the timing requirements. A company can IPO on JASDAQ and switch to the First Section in 6 months. For Second Section and Mothers-listed companies, it takes at least a year. If a company wants to get to the First Section quickly, it needs to figure out how to increase its shareholder count.

Long-time Japan investors are probably familiar with this, but many of the publicly listed Japanese companies offer what I like to call a “dividend variant”. The Japanese term for it is Yu-tai (pronounced you-tie). These are generally gift boxes, gift cards, and coupons. Personally, I prefer dividends, but the idea is to entice more investors to own shares. In Japan, you have entire investment blogs that go on and on about which stocks offer the best gifts.

Why does this matter? Because when a company is trying to get listed on the First Section, it needs 2,200 shareholders. If you find a long-time Second Section-listed company starting to offer gifts that it previously hadn’t, it might be a hint.

As an example, Fulltech (TSE: 6546), a company that installs, sells, and maintains automatic doors, has been listed on the Second Section of the Tokyo Exchange since March 22, 2017. The one year mark is right around the corner. It clears all the hurdles for a section transfer to the First Section, except for the shareholder count requirement (as of March 2017 reporting).

In Fulltech’s case, paying attention to its uplist potential would’ve paid off handsomely: 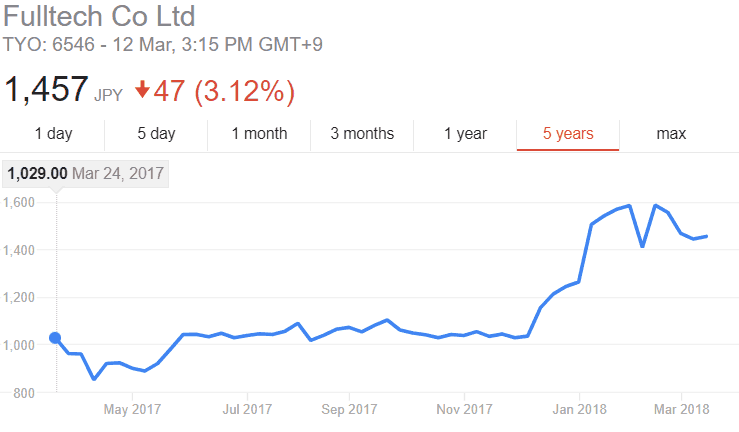 How can you spot these opportunities?

The Japanese Exchange Group is kind enough to give us a neat list of newly listed companies… in English!

Here is a screenshot from my the article:

In the example, I looked up Fanuc’s (TSE: 6954) ownership information.

If you get bored of going through Japanese net-net screens, give this approach a try!