Have you ever watched The Matrix? How about Quentin Tarantino’s Kill Bill? If you have, then you already have a taste for anime, a style of Japanese animation watched by every Japanese child and many adults. Needless to say, the industry plays an important role in Japanese culture, with close ties to the video game and toy industries. Overall, the industry is booming, accounting for over 2 trillion yen ($188 billion USD) in end-user revenues in 2016, according to The Association of Japanese Animations. Since I covered Japanese e-sports and the pachinko industry recently, it would be odd not to mention anime. Moreover, I wrote my latest newsletter about an anime-related company.

The easiest way to put it is this: Japanese cartoons.

Here are some of the most recognized anime titles in the world, in no particular order:

As I mentioned earlier the anime industry is booming:

The above chart is based on end-user revenues. The Association of Japanese Animation estimates that production revenues added up to 230 billion yen ($2.14 billion USD). Combined revenues add up to 2,231 billion yen ($20.8 billion USD). By this calculation the production companies accounted for 10.3% of 2016 anime-related revenues. The remaining 89.7% was generated through licensing of some form (i.e., reaching end-users).

The anime artists are starving. The average starting annual wage for a new anime artist is 1.1 million yen ($10,230 USD). The average workday lasts 11 hours, with only 4 days off each month.

How would you like to work for 321 yen ($3 USD) per hour?  That’s the average hourly rate for a newbie artist. Even across the entire industry, the average annual wage is a meager 3.3 million yen per year.

Why? Because of the way anime production is structured.

The structure of anime production

First, a production committee is formed to produce a single title. There are two types of committee membership: administrative and sponsor. The administrative member is the company that actually forms the committee and solicits other companies to join. The sponsors are the companies that have agreed to join. Together, the admin and sponsors invest capital in order to produce the titles. The committee awards a contract to a production company, and the production company distributes the work to subcontractors. Often times, the subcontractors distribute the contract further down to freelance artists. 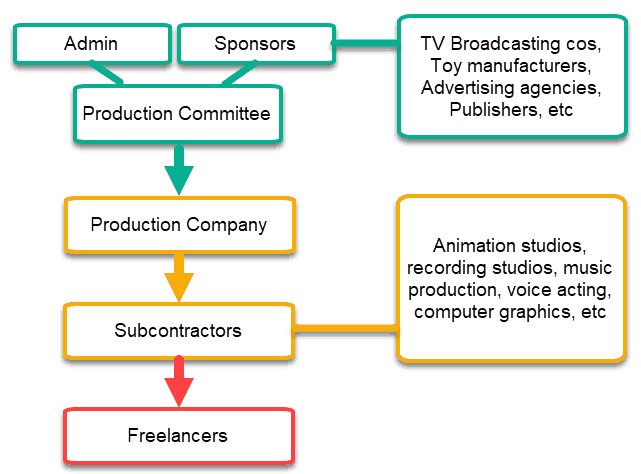 The production committee purchases airtime from TV stations and owns the intellectual property (IP) associated with each anime title. Generally speaking, the income gained from the anime is distributed according to capital invested. The IP rights are distributed to production committee members, too. For example, a toy manufacturer would have the rights to make and sell toys, publishers can create books, food companies can create anime-snacks, and so on.

Meanwhile, the folks actually producing the anime make their income on a project basis. In other words, no IP ownership or royalties. This is partially because anime production is a loser’s game. That is, 9 out of 10 anime titles lose money (Japanese source). The real question is whether the one home run can generate enough to cover the losses from 9 misses. The real, real question for committee members is whether a loss-making title can produce enough profit through licensed goods and services.

The production committee is in control

As you can see, the companies on the production committees are the ones to pay attention to. Now, it’s not like anybody with money can join the production committee. The committee is often highly selective about sponsor companies. This is because it is in the entire committee’s best interest for each member company to pull its own weight for brand building. The committee won’t accept a local toy manufacturer without a nationwide distribution channel or an apparel company that can only print 1,000 t-shirts each month.

Now it makes sense that the anime industry is booming, yet the artists are starving. Going back to the Anime Industry Report chart from earlier, 10.3% of the revenues generated in 2016 went to the production companies and starving anime artists. The remaining 89.7% were revenues generated through some form of licensing to reach end-users.

Here are some anime-related names: