Unless you’ve been to Japan, Doutor probably doesn’t ring a bell. It’s a coffee chain in Japan. And not just any coffee chain, but the largest native Japanese coffee chain with over 1,000 stores.

After a fellow Kenkyo reader asked about Doutor, I took a quick look. While I’m not big into consumer retail, the story behind Doutor’s founding is an interesting one to say the least. Since I haven’t written about a specific company in a while (and know at least one person will find this post useful), I decided to write about Doutor Nichires (TSE: 3087).

In today’s post, I’ll first give you the brief history of coffee in Japan, then talk about coffee shops and introduce some of the key players as well as recent events. Next week, we’ll go over the strategy of various coffee chains.

The Dutch introduced coffee to Japan towards the end of the 18th century. By the end of the 19th century, the first coffee shop opened in Tokyo. Coffee consumption gradually increased in the decades after until World War II, when consumption dropped like a rock. Consumption started to pick back up in the 1960s. Owner-operated coffee shops with music entertainment was the trend.

In the 1970s, “Manga” shops emerged where customers would grab a cup of coffee and enjoy their favorite comic books. Doutor came into the picture around this time. In the 1990s, internet cafes started popping up and Starbucks entered the Japanese market.

Today, coffee is a part of everyday Japanese life. You can buy it at the coffee shop, convenience store, and even out of a vending machine (in a can!).

According to the All Japan Coffee Association (AJCA) biennial survey, the average Japanese person consumed 11.09 cups of coffee per week. This number hasn’t fluctuated much over the last few decades: Though coffee consumption remained stable over the last 20 years or so, the number of cups consumed at cafes and coffee shops has declined. Much of the lost coffee shop consumption appears to have shifted to home consumption.

The number of cafes and coffee shops have declined considerably from a peak of 154,630 locations in 1981: 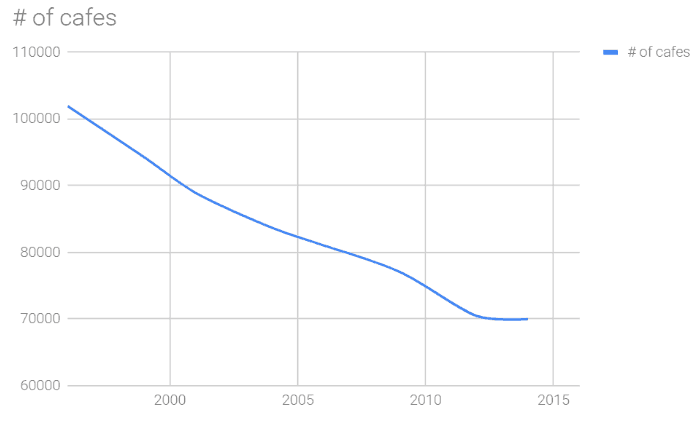 Coffee consumption overall has trended upward, though with a recent decline: 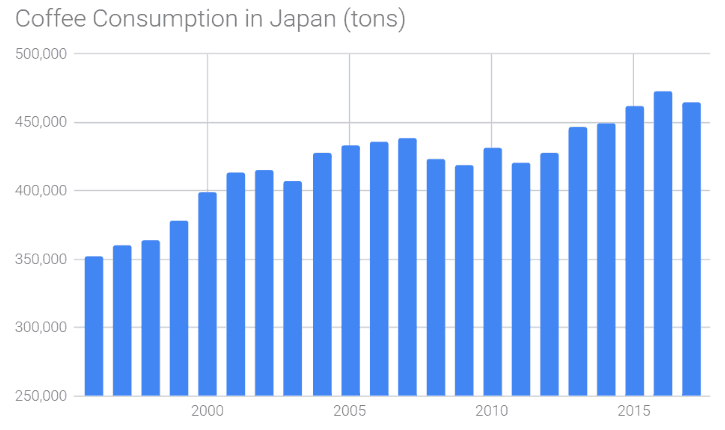 According to AJCA chairman Keiichi Yokoyama, coffee in Japan is a 2.9 trillion yen ($26.1 billion USD) market. It’s unclear exactly how much of that figure comes from coffee shops. With that said, precision isn’t particularly important when the industry dynamics are changing. And for coffee shops, the last 5 years has been interesting to say the least.

The most noteworthy event is the convenience store industry’s mad push into coffee. Over the last 5 years, all the major convenience chains started offering coffee in the bulk of their stores. 7-Eleven’s (TSE: 3382) Seven Cafe, Family Mart’s (TSE: 8028) FamiCafe, and Lawson’s (TSE: 2651) Machi Cafe all offer fresh coffee at a lower price point than pretty much every coffee shop. The quality is widely accepted as well, with convenience store coffee named 2013’s biggest hit product of 2013 by Nikkei BP Trendy.

The landscape is shifting, to say the least. Here are the key players:

And then there are also smaller relevant players:

Broadly speaking, the typical inner-city coffee shop is between 100 and 200 square meters (1,000 ~ 2,200 sq. ft.). If you get outside of the city, you’ll come across coffee shops twice the size as well. With the emergence of lower-priced decent quality convenience fresh coffee, coffee shops are in search for ways to differentiate their offerings.

Starbucks Japan, for example, started focusing more on offering some of the world’s rare coffee beans. Tully’s introduced a coffee shop where customers choose their own beans, have it roasted, and enjoy the subtle differences in taste, aroma, etc. Doutor Nichires has several coffee shop brands targeting different customers. Sanmark and Pronto are coffee shops during the day, but turn into a bar at night.

Next week, we’ll go a little deeper into how some of the key players in the industry operate.