If you didn’t get a chance to read last week’s post, you can find it here. To give you a rough overview, we succinctly discussed the history of coffee in Japan and how it became a part of Japanese life. Then we introduced some of the key coffee chains and the convenience industry’s recent entrance into the coffee game.

Today’s post is a continuation to last week’s post. We’ll go over how some of the key coffee chains are positioned in the industry.

First, let’s start with store count. Here are the top 5: 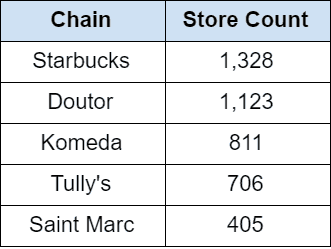 The store count for Doutor above only includes Doutor-branded stores.  Doutor Nichires (TSE: 3087) actually has several other brands like Excelsior (120+ stores) and Hoshino (200+ stores). Combined together, the Doutor Nichires group has more coffee shops than Starbucks.

One thing is clear, however, and it’s that Starbucks and Doutor are the two leading coffee chains by a long shot. Interestingly, #3 Komeda (TSE: 3543) has a disproportionately high store concentration in its home turf, Aichi prefecture, with  a whopping 240 stores. In comparison, Starbucks has 95 stores, Doutor has 46, and Saint Marc has 18 stores in Aichi prefecture.

This made me want to find out how many stores are in each of Japan’s three largest metropolitan areas: Kanto (Tokyo area), Keihanshin (Osaka area), and Chukyo (Nagoya area).

Since the company websites are searchable by prefecture (and not metro area), I did that instead:

Where will the next coffee shops open?

The All Japan Coffee Association produced a report showing population per coffee shop by prefecture. While the data is from 2014, the findings were interesting. I combined this information with 2015 population density data published by Japan’s Statistics Bureau.

The Northern Kyushu region – Fukuoka, Saga, and Nagasaki – seem to be good places to go as well.

In the most recent Japan Customer Satisfaction Index (JCSI) report, Caffe Veloce recorded the highest levels of customer satisfaction among 7 total coffee chains. The list of coffee chains included in the index were:

Here were the results of the 2018 JCSI report:

Caffe Veloce is a subsidiary of Chat Noir, which was listed under the smaller relevant players in last week’s post, along with Mister Donuts (subsidiary of Duskin, TSE: 4665). Caffe Veloce currently operates 172 locations. Its customer satisfaction ratings rose quickly over the last two years:

Before Caffe Veloce took the number 1 spot this year, Doutor was at the helm for three straight years. Starbucks hasn’t made the top 4 since 2016.

The customer satisfaction index is in line with many reviews on each coffee chain’s strategies too. Since this series is mainly about Doutor and Starbucks, I won’t get into the other coffee chains.

Starbucks is generally seen as an upscale coffee shop whereas Doutor is the “hardworking salaryman’s haven”. As such, Starbucks generally prohibits smoking while many Doutor shops offer smoking rooms. The price points are set higher over at Starbucks than the salaryman-catering Doutor, too. In fact, Doutor got its start in the 1980s by offering a cup of coffee for 150 yen when the typical coffee shop averaged 300 yen.

Even today, Doutor maintains a much more affordable price point at 220 yen ($1.97 USD). As a comparison, a cup of coffee at Starbucks starts at 280 yen ($2.51 USD). What’s more? You won’t find a frappe (or any other drink with more than 5 syllables) at Doutor. And the frappe is a signature beverage for Starbucks. Instead, Doutor offers variations of basic coffee, tea, and simple sandwich meals. Starbucks, on the other hand, has just about every coffee and tea variation imaginable, along with a more dessert-focused food menu.

Next week, we’ll go over the history of Doutor. Until then!