But before we get into the war, let’s take a look at history.

Malls, shopping centers, and the birth of Japanese convenience

With “price destruction” as its slogan, Daiei displaced department stores and quickly became Japan’s largest retailer (1972). Other retailers followed, shaping the 1970s and 80s into the age of mall and shopping center operators. There were 6 key players: Daiei, Ito Yokado, Saison, Jusco, Nichii, and UNY. Daiei, Ito Yokado, and Saison, having hit one trillion yen in sales in the 1980s, were referred to as the “Big 3”.

Unable to compete with the scale of emerging malls and shopping centers in the 1970s, smaller retailers were feeling the pain. The struggle extended to Morita Company, a Nagoya-based brewery (alcohol, soy sauce, bean paste) and distributor. Its customers, mainly small liquor stores, watched sales decline as supermarkets and shopping centers popped up nearby.

Yes, CoCo store, short for “Comfort and Convenience”. The idea, of course, came from when Kazuaki visited the US and discovered 7-Eleven (Japanese). Store number 1 was owned and operated by the Morita Group. And the group worked to convert its struggling liquor store customers into convenience stores.

Then, the Big 3 retailers started moving.

Around the same time, Tokyo-based Ito Yokado was trying to communicate to small retailers that local shopping districts and large scale retail facilities can coexist (Japanese). According to then Ito Yokado director Toshifumi Suzuki, small retail’s struggle wasn’t due to big retail coming in, but rather because small retailers had a productivity problem. Lacking a real-word example of a small-but-successful retailer, his message didn’t go through very well.

And Seiyu (Saison group) had set up its first experimental convenience store in 1973, but didn’t get its first franchise Family Mart store opened until 1978.

Jusco and UNY were late to the party, opening Ministop (TSE: 9946) and Circle K/Sankus in 1980, respectively. Nichii never showed up.

Aside from CoCo store and the big retailers, smaller convenience chains also emerged. Seico Mart, founded in 1971, is a private regional powerhouse primarily operating out of Hokkaido. Yamazaki Baking (TSE: 2212), one of the world’s 5 biggest bakers, started its own convenience chain Daily Yamazaki in 1977. A local Kanagawa/Tokyo grocer Fuji Super started Three F in 1979. And finally, Poplar (TSE: 7601), originally a liquor store, converted into a convenience store in 1983 and expanded its store network thereafter.

In the early 1990s, however, the bubble comes to an end and people tighten up their wallets. It didn’t end there either. Category killers like Uniqlo (Fast Retailing [TSE: 9983]) in apparel, Nitori (TSE: 9843) in furniture, and Yamada Denki (TSE: 9831) in consumer electronics started aggressively expanding their footprint. Discount retailers like Don Quijote (TSE: 7532) started gaining traction too, and by the late 1990s, Daiei, Saison, and MyCal (formerly Nichii), all heavily in debt, started falling apart.

Meanwhile, Ito Yokado remained relatively healthy, thanks to its historical focus on productivity and item level inventory management. Jusco, which had a strong supermarket business, was among the first to introduce private branded products that offered national-brand comparable quality for a lower price, keeping the company competitive and healthy.

MyCal filed for bankruptcy in 2001, with 1.9 trillion yen in liabilities. Aeon (formerly Jusco) sponsored MyCal through restructuring and in 2003, the company became Aeon’s subsidiary.

Struggling to survive, Daiei sold off most of its Lawson stake to Mitsubishi Corporation (TSE: 8058), one of Japan’s largest trading companies, in 2001. In 2004, Daiei went under the supervision of the Industrial Revitalization Corporation of Japan, which is like Sweden’s Securum (in other words, bankruptcy and restructuring for big companies). In 2005, one of Japan’s largest trading companies Marubeni Corporation (TSE: 8002) and Japanese private equity firm Advantage Partners became Daiei’s sponsor. In 2007, Marubeni, Daiei, and Aeon announced a partnership, bringing Aeon on board for further restructuring. Later that year, Aeon’s private label brand products were put on Daiei shelves. In 2013, Aeon purchased most of Marubeni’s stake in Daiei, making Aeon the largest shareholder (44%). In 2015, Daiei becomes a wholly owned subsidiary of Aeon.

After the bubble burst, Seiyu subsidiary Tokyo City Finance found itself with a mountain of non-performing loans, forcing Seiyu to sell its assets and eventually resulting in the dismantling of the Saison Group. Itochu Corporation (TSE: 8001), another one of Japan’s largest trading companies, purchased Seiyu’s stake in Family Mart, making Itochu the largest shareholder. With the intermediation of Sumitomo Corporation (TSE: 8053), another big trading company, Seiyu eventually became Walmart’s wholly owned subsidiary (2002 ~ 2008).

Despite big retail being in shambles, convenience slowed down for only a brief moment, then continued on its growth track. 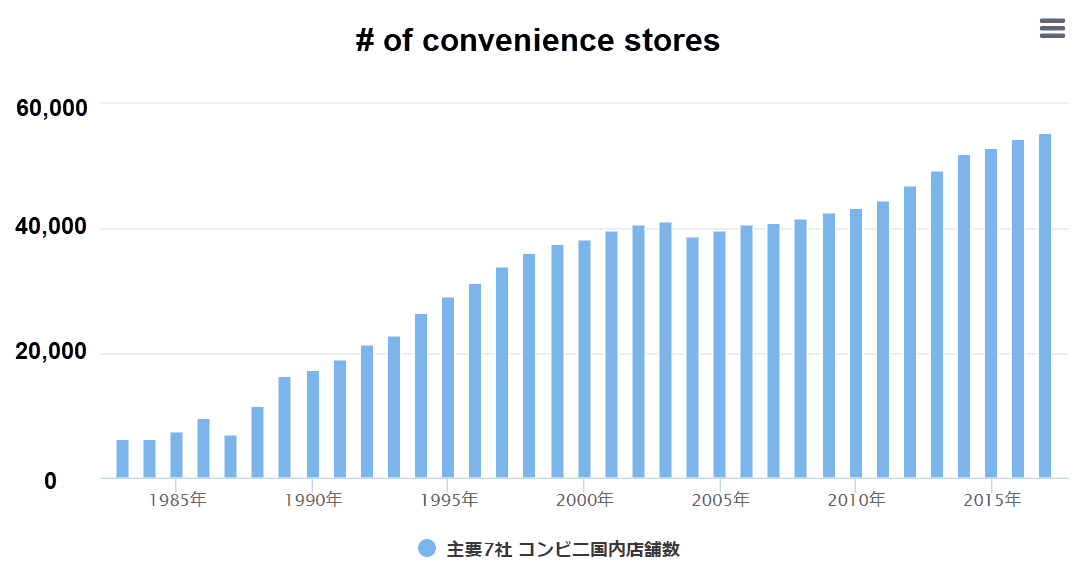 Family Mart grew by developing its own information system, pushing for an area-franchise system with regionally strong businesses, and M&A (am/pm in 2010, Coco store in 2015, Circle K/Sankus in 2016).

Lawson’s growth too, was supported by an area-franchise system. It also partnered with smaller convenience chains Poplar (2014) and Three F (2015). In 1997, the company became the first to operate stores in all 47 of Japan’s prefectures. Family Mart joined the club in 2006, and 7-Eleven is expected to join with its planned 2019 entrance into the Okinawa market. 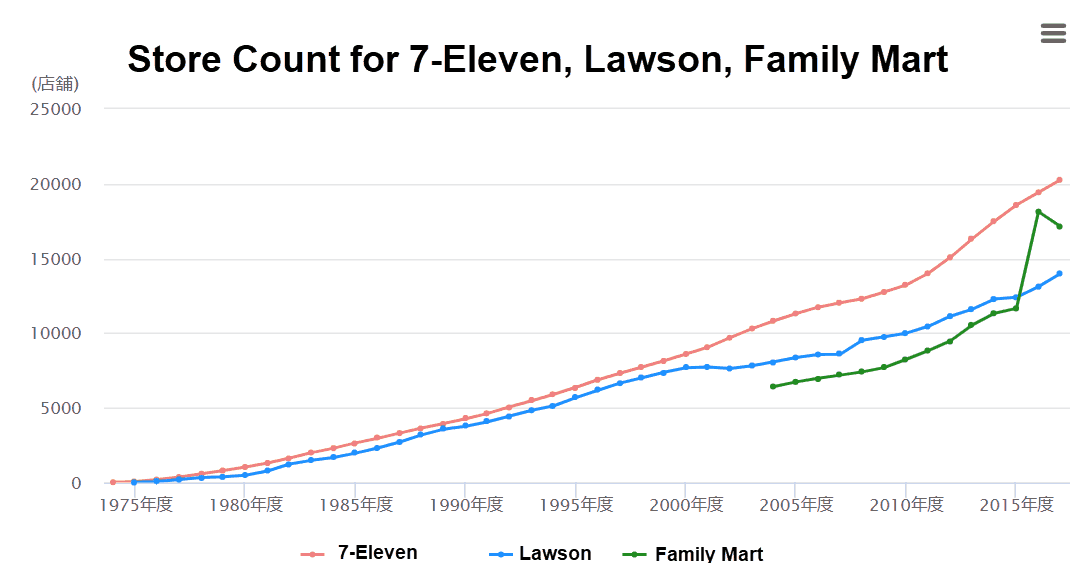 And there’s a key player missing in this picture: Aeon.

Aeon-lead Ministop, with 2,261 stores in Japan at the end of 2017, was left far behind. Ministop reported losses for the first time in fiscal 2018.

Meanwhile in drug stores and pharmacies The top 5 players in the Prescription Pharmacy market are:

And here are the top 5 players in the Drug Store market:

For over two decades, Matsumoto Kiyoshi held the #1 spot (by revenues) in drug stores. In late 2014, Aeon made its move: A tender offer on Welcia Holdings, raising Aeon’s stake in the company from 37.4% to 50.1% (Japanese). Then, Aeon proceeded to merge 3 of its mid-tier drug store subsidiaries with Welcia. By 2017, Welcia Holdings had become the largest drug store chain in Japan by revenues.

Now, the Aeon “Keiretsu”’s influence is difficult to gauge. This is because Aeon has historically acquired small stakes in many different companies, but mostly remained a silent partner with its 300+ group companies. This stance changed when Aeon group drug chain operator CFS Corporation, lead by its founding family, tried to merge with pharmacy leader Ain Pharmacies in 2007. Aeon voted against the merger, won a proxy battle, and prevented the merger. A few years later, CFS was merged into Welcia.

Aeon still has a considerable amount of reach left. From a capital partnership going back to 1995, Aeon remains the largest shareholder (12.86% stake) in Tsuruha Holdings, the #2 drug store chain in Japan. Neither Tsuruha or Welcia has made any mention of a merger… yet.

“We will start offering products commonly available at convenience stores.”

To be sure, Welcia’s 1,693 store network pales in comparison to 7-Eleven’s 20,260 stores. But a Welcia-Tsuruha-Ministop 5,000 strong store alliance within the Aeon group starts looking more formidable.

What Aeon missed out on in the age of convenience, it’s fighting to regain in super-convenience.

Structurally, it’s easier for drug stores and pharmacies to develop a network of stores to sell convenience products than it is for convenience stores to start selling drugs and prescriptions. The key bottleneck is a regulatory requirement: You need a registered sales clerk for OTC drug sales. More details on that here. The competitive environment becomes even more interesting when considering Aeon’s relationship with Lawson and parent Mitsubishi. Mitsubishi, with its 4.64% stake, is actually Aeon’s second largest shareholder behind the Bank of Japan. Taking a look inside Ministop, you’ll find the same Loppi machines (used for purchasing tickets, paying bills, etc). A Mitsubishi-Aeon alliance would create a drug/convenience store network on a similar scale to that of 7-Eleven.

And it’s not like Seven & i Holdings is twiddling its thumbs and waiting around either. With an already sizeable drug store operation through Ito Yokado, the company had a late and somewhat surprising start in pharmacies. Earlier, we mentioned Aeon’s proxy battle to prevent group company CFS corporation’s merger with pharmacy leader Ain Holdings in 2007/8. Well, shortly after the merger plans were scrapped, Ain Holdings entered into a capital partnership with Seven & i Holdings in 2009. Today, Seven & i Holdings is the #2 shareholder in Ain with a 7.76% stake, only behind leading shareholder Ain founder Kiichi Otani.

So far, 7-Eleven’s presence in drug stores and pharmacies have more or less been limited to Ito Yokado operations, and mostly out of news coverage. With that said, if its area-dominant convenience strategy is any indication, 7-Eleven will likely rollout whatever drug store/pharmacy it has up its sleeve at lightning speed once it gets rolling.

What this means for investors

Of course, if you’re reading this, you’re probably contemplating what sort of investment opportunities the shift in convenience/drug store/pharmacy industries create. First, it appears Aeon has a headstart in “super convenience”. But 7-Eleven, known for centralized management and supply chain efficiency, likely won’t stay quiet for long.

Figuring out who “wins” this war is a bit of a toss up, and there’s always the possibility that neither one comes out ahead. With that in mind, there are several things that are almost certain to take place – like increased M&A of small and mid-tier drug/pharmacy chains, system implementation for a more consolidated pharmacy industry, rolling out of private label drugs etc.

The first level (and most obvious) investment opportunities are M&A of small and mid-tier chains. Some candidates are:

But the second level investment opportunities, or “backdoor” plays are often interesting too:

Aeon’s war against 7-Eleven has begun with Welcia on the frontlines. Its “super convenience” strategy  takes traffic away from convenience stores by offering the same products for less while remaining profitable through OTC drugs, prescriptions, and cosmetics.

So far, 7-Eleven hasn’t meaningfully responded. That said, the company is known for centralized management and supply chain efficiency, and now armed with Ain Holdings, the largest pharmacy operator.

While it’s impossible to tell which company will come out out ahead, investors can seek out investment opportunities by looking into smaller drug/pharmacy chains (M&A) or other companies likely to perform in line with industry trends (food strategy, system implementation, etc).

If you enjoyed this article, please consider sharing it with your friends on Twitter, Facebook, or LinkedIn using the share buttons to the right. If you really enjoyed it, please consider supporting Kenkyo Investing by signing up for one of our services.