This post was originally published on July 28th, 2018 as a part of the Kenkyo Magic Formula offering.

Data Applications is the leader in a niche EDI middleware market with a 38.2% share as of 2016 (Japanese). If you’re not too familiar with computers, the last sentence probably sounds both cool and confusing at the same time. Let’s start by understanding what EDI middleware is.

What is EDI middleware?

So first things first, EDI is short for Electronic Data Interchange. Wikipedia’s description should give you a good idea:

“Electronic data interchange (EDI) is the concept of businesses electronically communicating information that was traditionally communicated on paper, such as purchase orders and invoices.”

As for the “middleware” part of the term, as it relates to Data Applications, is basically a piece of software that comes between databases and applications.

Perhaps an example would be better.

Let’s say Toyota Motors (TSE: 7203) wants to buy spark plugs from Denso (TSE: 6902). The sales process would probably look something like this: 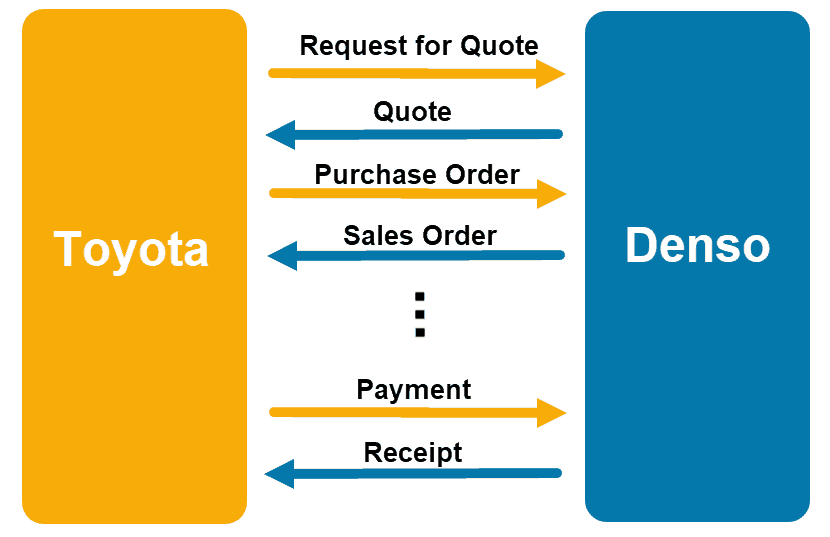 In the old days this was, of course, done on paper. With the emergence of electronic communications, however, businesses started sending the same business documents electronically. No need to wait for snailmail to arrive.

Instead, we started waiting at the fax machine. Then in front of the computer screen for an email. Once we received a purchase order from the customer, we’d manually input it into our company’s system. For large companies, these systems are the likes of SAP and Oracle. Commonly referred to as Enterprise Resource Planning (ERP) systems.

Then came along the brilliant idea of removing the waiting and manual input of information. This is the advent of EDI. It sounds about as easy as having a robot move a box from shelf A to shelf B all day long. Unfortunately, different companies have different formats for business documents. You’ve seen it before, purchase orders saved in .xlsx, .pdf, .xml, .docx, and a dozen other formats. Then you open the document and the information is laid out differently from company to company.

Some companies still run on mainframe systems (think: black screen with green letters)  while others run on SAP’s cloud-based systems. And these systems need to talk to each other. What Data Applications develops is the software that helps “translate” this data so information can flow smoothly between companies. In the industry, they literally call it EDI translation software.

This report was referenced by Data Applications in an earnings presentation with the names of other companies removed. That said, only two companies accounted for 70.4% of market share and if I had to take a guess, the other company is probably Planet (TSE: 2391).

With ever-increasing demand for computer systems and cloud-based everything, you can probably guess that the demand for EDI translation software is on the rise. More importantly though, Japanese companies still running on legacy systems are facing a “2024 problem”.

NTT (TSE: 9432), the largest telecom company in Japan, will stop supporting the public switched telephone network (PSTN) and integrated services digital network (ISDN) in 2024. In other words, the company will no longer support legacy landline phone networks. This pretty much spells the death of legacy EDI systems.

With the death of legacy phone and EDI systems comes the mass migration to Internet Protocol (IP) based systems. In a Radio Nikkei interview (Japanese), Data Applications CEO Yoshinobu Takeda mentioned that 70 to 80% of EDI systems run on ISDN. And the good news is, Data Applications products support both legacy and IP-based EDI.

One thing to keep in mind when thinking about the 2024 problem is that PSTN and ISDN support was originally set to end in late 2020. NTT pushed the date back to 2024 due to the large number of companies still running on legacy systems.

Another thing to keep in mind is the heightened data security risk with IP-based EDI relative to legacy EDI. Most of the large companies run their own legacy EDI systems. However, when migrating to IP-based systems, there is a good chance that companies would want to bring on a service provider to manage systems. In a December 2017 interview with ZDNet Japan (Japanese), Yoshinobu commented that Data Applications will not be offering these services as it would put the company in direct competition with its partners.

Here are some of Data Applications’ partners: Though Data Applications operates through a single segment, it categorizes revenues into three: Software, Maintenance, and Other. Generally speaking, the distribution is 40% – 50% – 10%.

In the same Radio Nikkei interview referenced earlier, Yoshinobu touched on scale benefits. Once Data Applications’ products reached an install base of 1,000 companies, the company was recognized as the dominant player. Similar to how companies interested in an ERP system first think of SAP, companies looking into EDI tools think of Data Applications. As of March 2018, the install base sits at 2,210 companies.

With an already dominant position in EDI middleware, Data Applications is thinking about what’s next. Yoshinobu talked about targeting what he calls the “data integration market”. This is a mashup of Apex Integration (AI), File Transfer, Extract/Transform/Load (ETL), and EDI markets which totals to 42 billion yen ($380 million USD).

Data Applications’ focus is on expanding current share in the EDI middleware market and developing new and related services in other data integration sub-markets.

The key points on Data Applications’ financials & business performance are below:

Today’s valuation is about right if the company has no growth prospects. As a comparison, Planet trades at 13 times EV/EBIT with comparable business performance.

Given the industry-wide opportunities presented by the 2024 problem and Data Applications expanding into other data integration areas, it’s likely that the company will at least keep pace with historical top-line growth.

For fiscal 2019, Data Applications is guiding a 5.7% increase in revenues and 10.8% increase in operating income. With some historical performance in mind, I’ll layout a few scenarios.

Basically, fiscal 2018 performance, except raise payout ratio to 80%. At today’s 2,200 yen per share price, dividend yield will come out to ~5.5%. With 6 times EV/EBIT, we’ll just call this fairly valued. Investment performance wise, dividends will come out to 118 yen per share each year. Taking this into consideration with no stock price movement, 5 year investment CAGR will be 4.9%.

For every 1% of revenue growth, operating income grew about 4% over the last 10 years. Fiscal 2018 operating margins came in at 28%. Assuming continued 4.8% CAGR top line growth and similar EV/EBIT multiple (6x), investment CAGR over the next 5 years should come in at 10.9%.

5 year revenue per share CAGR was at 5.7%. With the same idea as the previous scenario, 5 year investment CAGR should come in at 12%.

Data Applications stock presents a Dhando-like opportunity. The worst case is no growth and reasonable case is continued growth at historical pace, specifically in EDI middleware. Five year investment CAGR ranges between 4.9% and 12% in these scenarios. The optionality of expansion into related data integration markets for a 100 bagger comes free. Heads, you win big, tails you win a little.

Data Applications is an EDI middleware market leader with healthy growth prospects in related data integration markets. In addition to its strong market position, the company has several attractive business qualities to it like strong free cash flow generation, growth, and scalability. At today’s price of about 2,200 yen per share, the stock presents a Dhando-like opportunity. Five year investment CAGR in the outlined scenarios range between 4.9% and 12%. The optionality of expansion into related data integration markets for a 100 bagger comes free.