This post was originally published on October 26th, 2018 as a part of the Kenkyo Deep Value offering

Funai Electric (TSE: 6839) is a consumer electronics manufacturer known for OEM manufacturing of televisions, VHS/DVD/Blu-ray players, printers, and ink cartridges. The company has a strong presence in the US, mainly attributable to its decades-long relationship with Walmart (NYSE: WMT). Domestically, the company signed an exclusive sales deal (2016, in Japanese) with Yamada Denki (TSE: 9831), the largest consumer electronics retailer in Japan, for sales of Funai-branded televisions and blu-ray sets.

Sales by product for fiscal 2018 looks like the following:

With the brief exception of fiscal 2015, the company has recorded operating losses for the last six years. The emergence of low-cost Chinese manufacturers and fabless operators in the early 2000s has resulted in increased competition and significant decline in revenues for Funai, and the pressure continues today.

The Funai name became well known in Japan in the 1980s, when the company was battling Samsung and LG as the low-cost television manufacturer. Since then, Samsung and LG switched directions to build a brand associated with higher quality electronics. But Funai took a different path: original equipment manufacturing.

The company has built Mitsubishi, Toshiba, Magnavox, Philips, Emerson, Kodak, Sanyo, and other branded electronics, primarily televisions. With the emergence of low-cost Chinese manufacturers and fabless operators (like Vizio), however, Funai’s bread and butter television business has suffered. So far, the company’s answer to this revenue decline has revolved around developing the Funai brand in Japan and looking into manufacturing other products, like electric vehicle components. Neither has materialized yet.

Dealing with the devil

Yamada Denki and Funai’s business relationship extends back over 30 years. That said, the exclusive television sales deal didn’t happen until 2016. One important thing to know about Yamada Denki is that it’s like a mini-Walmart in consumer electronics.

Yamada Denki became the largest electronics retailer through tough negotiating with suppliers and selling a whole lot of inventory on razor thin margins. The famous story in the Japanese business world involves Daikin Industries (TSE: 6367), the largest air conditioning manufacturer in the world.

In the early 2000s, Yamada Denki hit 1 trillion yen ($89 billion USD) in annual sales. Along with sales figures, Yamada Denki’s negotiating power grew. According to Nikkei (in Japanese), household names like Panasonic and Sharp were accepting of Yamada Denki’s tough negotiation and discount retail approach, precisely because of the large volume of sales.

There was one problem for Daikin: Unlike Panasonic or Sharp, which have a long list of consumer electronic products to sell in large volumes on low margins, Daikin is exclusively focused on air conditioners. According to the same Nikkei article, one Daikin executive told a Yamada Denki executive:

“If you’re going to sell at that low of a price, there is no need for you to sell our products at all. We will focus on our overseas business.”

Today, you won’t see any of Daikin’s products at Yamada Denki’s 700+ stores.

Though sales volume is sure to rise through the exclusive sales deal with Yamada Denki, which only has 5 suppliers (including Funai) for televisions, it’s difficult to imagine a scenario where Funai’s profits are more than a hair over breakeven.

And then the other one

And then we have Walmart. In Japan, if one customer accounts for more than 10% of annual revenues, the customer’s name and transaction values are listed in the annual filings. Walmart has made this list for over a decade. As a point of reference, here is revenue by geographic region: Walmart revenues have been relatively stable. With that said, there hasn’t been any real post-crash recovery. In fact, 2018 revenues came in lower than 2011 revenues.

Unlike Yamada Denki, Walmart has a long list of suppliers: 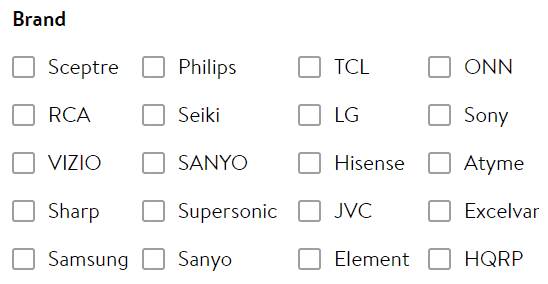 You may have noticed that Funai’s name isn’t on the list. According to Funai Corporation, Funai Electric’s US subsidiary, the company currently handles Magnavox, Philips, Sanyo, and Kodak (printers, ink cartridges) brands. The company started producing televisions in Mexico in October 2016, but has been unable to return to profitability.

In other words, Walmart accounts for more than half of Funai revenues today, none of which are for Funai-branded televisions (Walmart sells Funai-branded blu-ray/dvd players). This means the Funai-brand strategy is near-exclusive to Japan and practically only available at Yamada Denki, a consumer electronics retailer focused on high volume low margin sales. Moreover, the company has lost most of its non-Walmart business in the Americas and practically all revenues outside of Japan and the Americas.

Source: Nikkei, % of outstanding shares and translation by author

Tetsuro Funai, the founder of Funai Electric, passed away on July 4th, 2017. Tetsuo Funai, the eldest son of the founder, inherited the stake. Tetsuo Funai is a doctor and not involved in company operations, but assumes the role of board chairman with no representation rights.

F2 and T&N are Funai family funds. And then you have Funai Foundation for Information Technology, Funai Industries, and Funai Foundation. Collectively, the family own 49.97% of outstanding shares.

In addition to the shareholders listed above, the company noted several unconfirmed shareholders with significant stakes:

Funai Electric did a 1-to-3 stock split on September 11, 2000. The split adjusted share count is listed under “AdjustedShares” above.

There are stock options, but it comes out to less than 1% of outstanding shares.

Several key points to note in thinking about Funai financials and valuation:

Though there is a possibility for Funai to return to profitability, in all likelihood, the outcome is dependent on factors outside of Funai’s control like favorable component/raw material prices, currency exchange rates, tax rates, and such. With rapidly declining NCAV and seemingly no stop to continuously deteriorating operating performance, investors are best advised to avoid Funai altogether. Those considering investing in Funai should limit exposure to an immaterial size of the portfolio.

Funai was once a leader in low-cost consumer electronics However, emerging competitors have taken much of the company’s margin out. Today, Funai struggles to turnaround the company with no end in sight. Though the company currently trades below NCAV, investors are best advised to avoid investing in Funai.

Flailing Clothing Company With Signs of Improvement Trading for 55% NCAV

Flailing Clothing Company With Signs of Improvement Trading for 55% NCAV